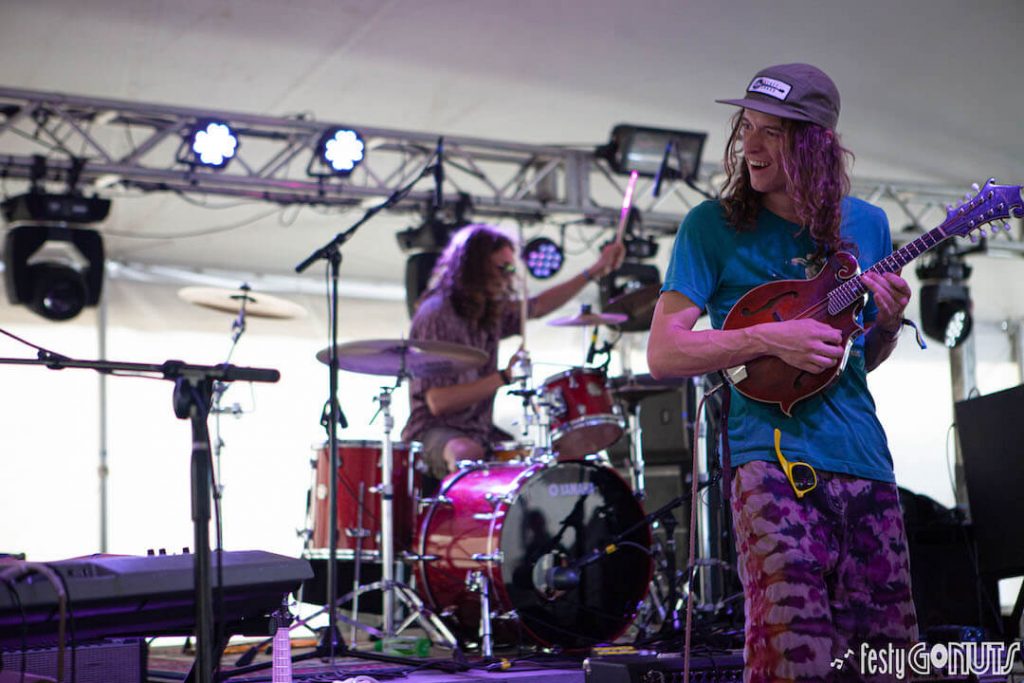 By Coya Pair.  Photos by Sophie Schwartz and Cy Fontenot.

August 2nd – 4th 2019, Sunrise Ranch in Loveland, Colorado hosted their 7th annual Arise Festival, which is now said to be the largest festival in Colorado, which isn’t surprising after taking one look at the itinerary. The incredible location of Sunrise Ranch in the Eden Valley, the delectable food trucks, the mindful workshops and the diverse genres of music is what attracted so many individuals to gather together and share energy. 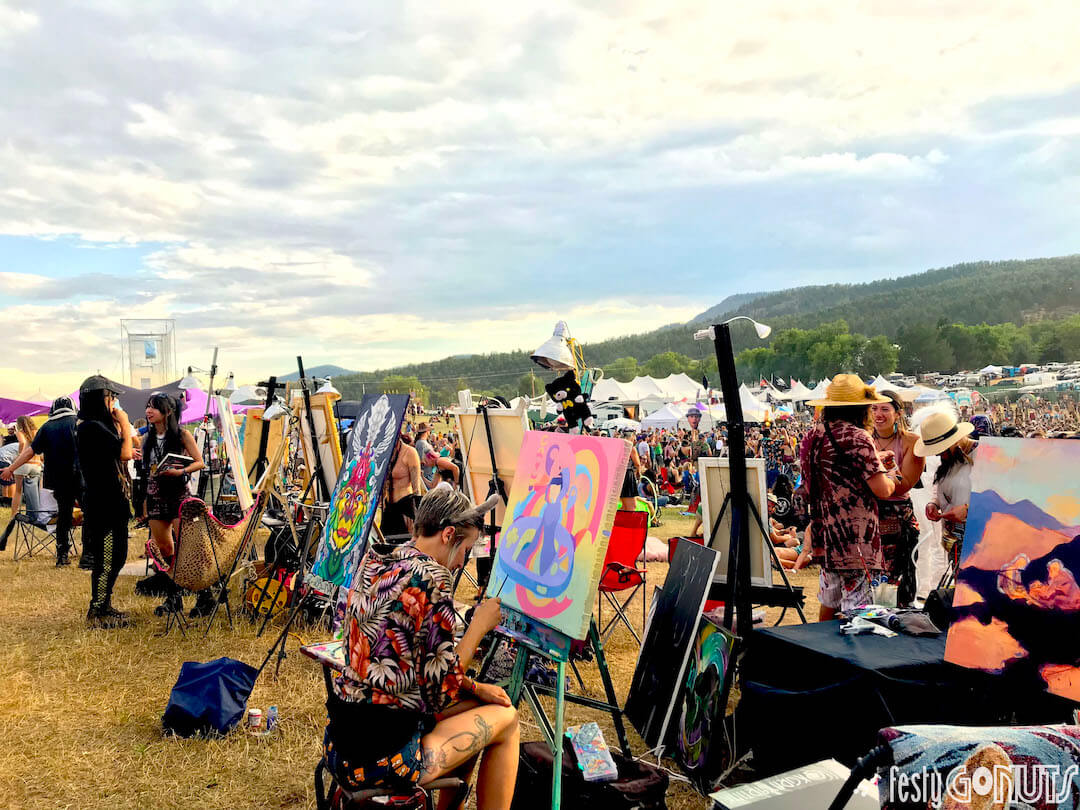 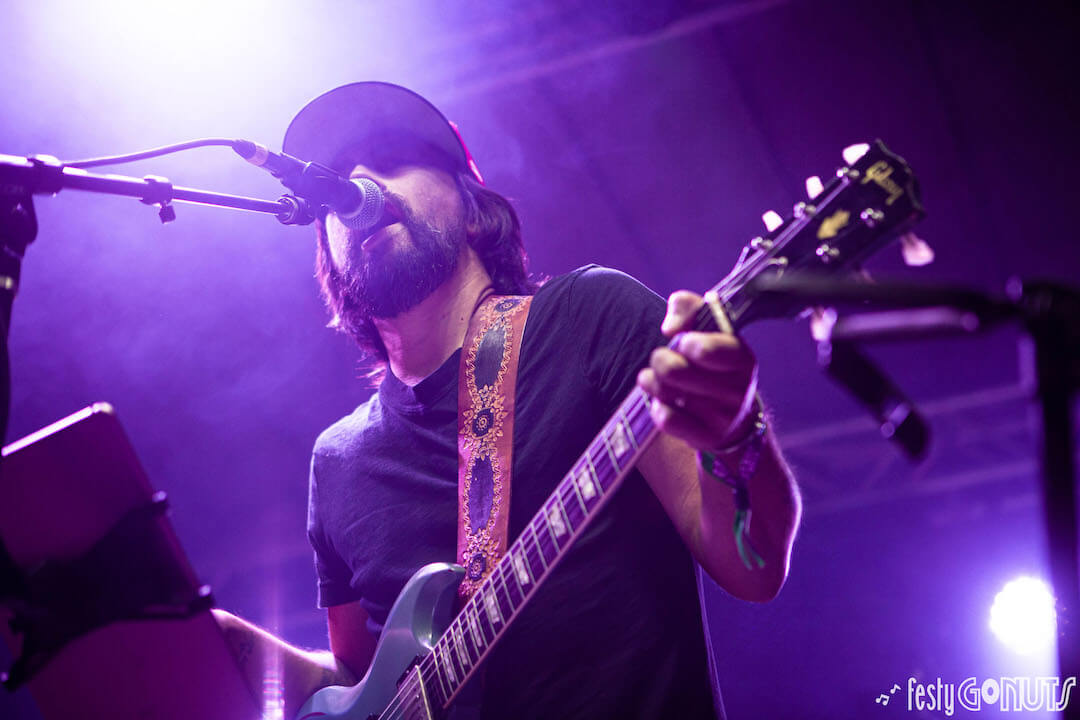 Not just to Awaken, but to Arise.

Throughout the morning and afternoon, bands and campers trickled into the valley and began setting up for an evening or entire weekend of bliss. We were able to make it to the first show of the evening at the Eagle Stage, as Tenth Mountain Division kicked off the weekend. The Colorado local band said that Arise is the most environmentally and socially conscious festival they have ever performed at, as the staff made it clear that we are on sacred, native land and must honor it as such.

An Arise staff member said that he cares less about your “awakening” and more about what you do after, what you do when you “arise”. To be empathetic, open and aware of other people and our planet Earth are practices that we all ought to integrate into our daily routines and mindset.

Before Tenth Mountain Division’s set finished, Liver Down the River, another local Colorado band, from Durango, began playing at the Pirate Stage. It was their first time at Arise as well, and they spent it well, gifting soulful and uplifting jamgrass to the public.

Beats Antique then came on the Eagle stage and played their electronic set while beautiful belly dancers danced on stage. One dancer and a founding member of the band, Zoe Jakes, was pregnant while she danced. With their organic movement and giant feathers, the girls painted a picture of body positivity and female empowerment.

Later that night, with everyone’s bellies filled with ethically sourced meals from the food trucks, Leftover Salmon started their first acoustic set at the Terrapin Stage, while Tipper took over the Eagle stage. Leftover Salmon said that the mix in the audience led to a great overall energy.

Near the end of Salmon’s set, to everyone’s surprise, they began bringing up some members of Fruition to the stage. Eventually, Fruition in its entirety took over and played an hour and a half set as Arise’s “mystery band”.  Fruition told me that they have connections with the festival coordinators, and knew they were booked for Arise for months, but just kept it a secret to surprise the public. The band then brought members of Salmon back to the stage to perform one big jam session together, and then Leftover Salmon finished off the night with their final electric set. 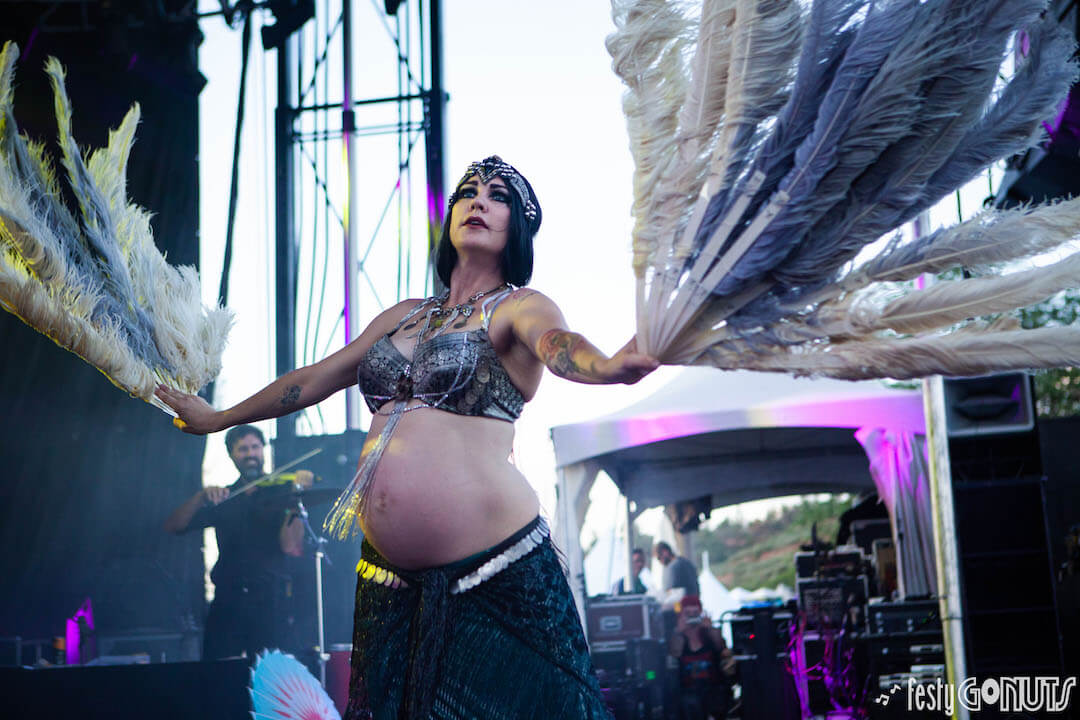 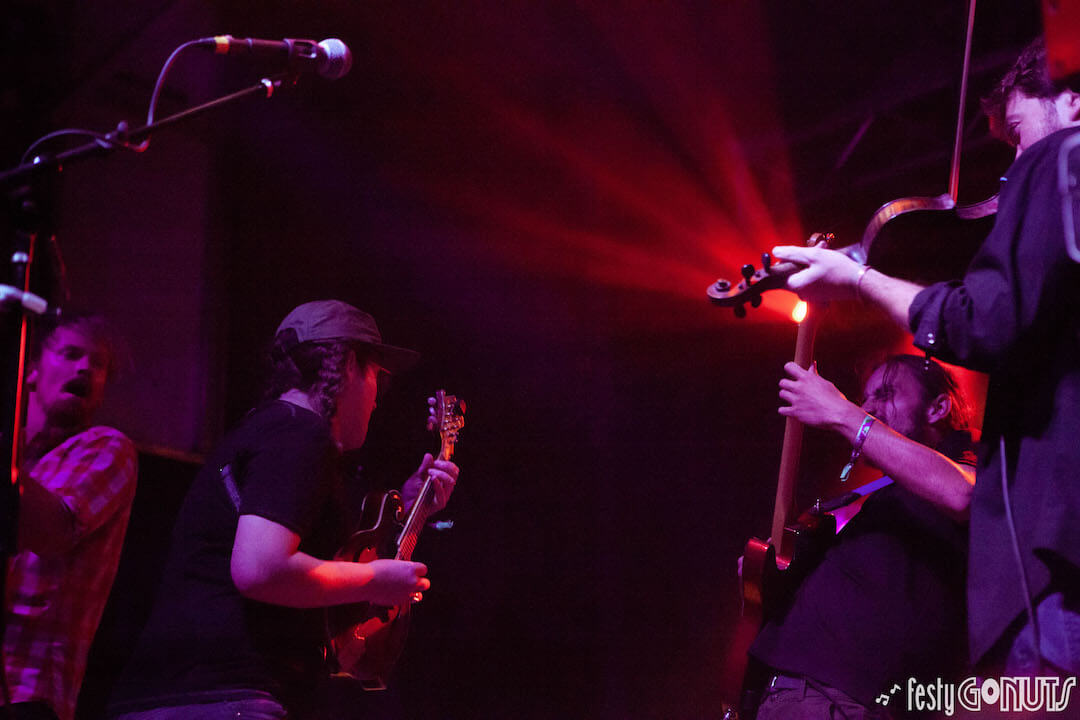 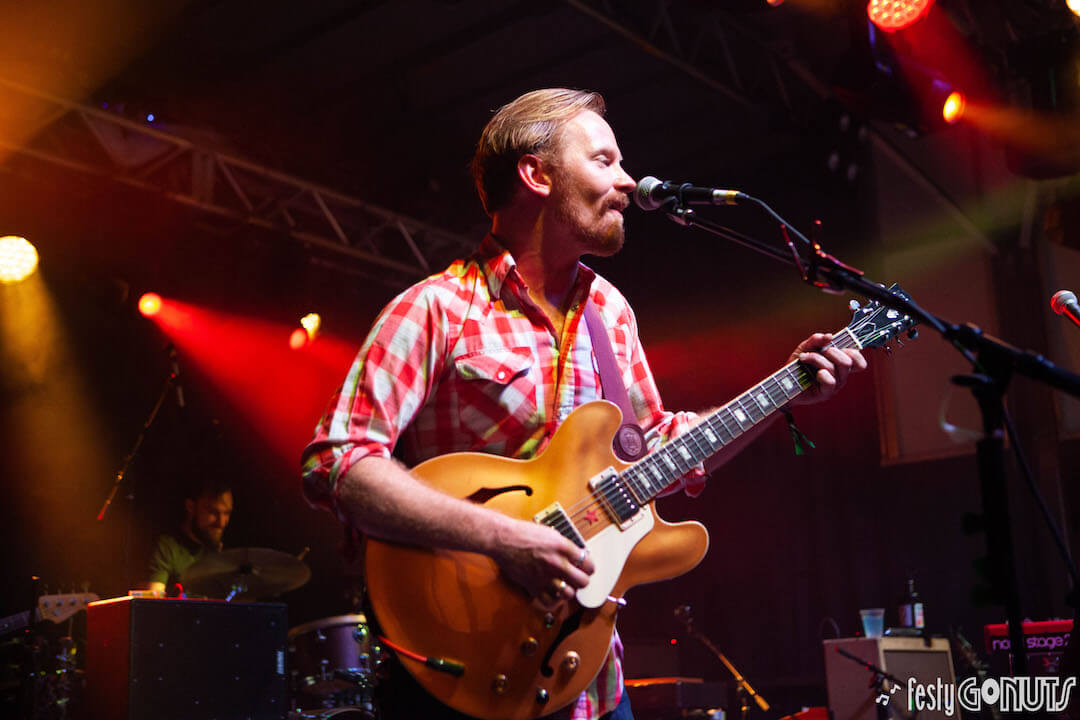 Intersecting All of Our Colors

On Saturday, after the first wild night of the weekend, most people awakened slowly under the heat of the summer sun. The 9am Prana Vinyasa class with Kristin McHard at the yoga sanctuary was packed full as people mindfully moved their bodies to detox from the night before and prepare for the day to come. Live music by Yaima accompanied the class as we found ourselves in deep stretches and meditation.

That afternoon, avoiding the heat of the day, we made our way over to The Big Sunrise Dome for the first annual Arise Rap Sessions. Here, members of the Arise staff were seated on stage to discuss their relationship with the festival and answer any questions.

Bridget Law, musician and wife of Arise founder Tierro Lee, said, “Arise is much more than a music festival. It is a place to intersect our colors and create the most beautiful rainbow.”

The staff also explained that the goal for Arise is to get people to embody this loving and accepting community, and take that back into everyday society. They said change needs to happen, and allowing deep spiritual experiences for people is a form of activism.

Festivals are often seen as big parties, and not much more. The Arise members noted that though partying is fun, it’s not just about feeling good, but doing good. Arise should be viewed as an energetic recharge.

Apollo Raps, social activist and musician, wrapped up (no pun intended) the conference with his new take on John Lennon’s “Imagine”, using the same melody and creating his own lyrics and hip-hop influence, bringing nearly everyone to tears. Soundcloud link available here.

All evening the wisdom and healing villages were chock full of sound healing, expressive dance, and breathwork workshops. After the sun set and the air cooled, we made our way to the Terrapin Stage to see The Main Squeeze.

This band brought a powerful funk, soul, and rock influence into the valley. On stage they announced “We’ve only been here for a few hours, but we’re certain that together we can all have the best dance party of the whole weekend.”  And through breathtaking vocals, tight instrumental harmonies and an ecstatic energy, they did just that as we sang our hearts out and boogied our booties off.

The party didn’t stop there, and Voodoo Dead hopped on Terrapin Stage shortly after to play two sets back to back, while Clozee and then Frameworks played at Eagle Stage. Saturday night ran into Sunday morning as everyone stayed enthused and infatuated with the music, art, lights and beauty of Eden valley. 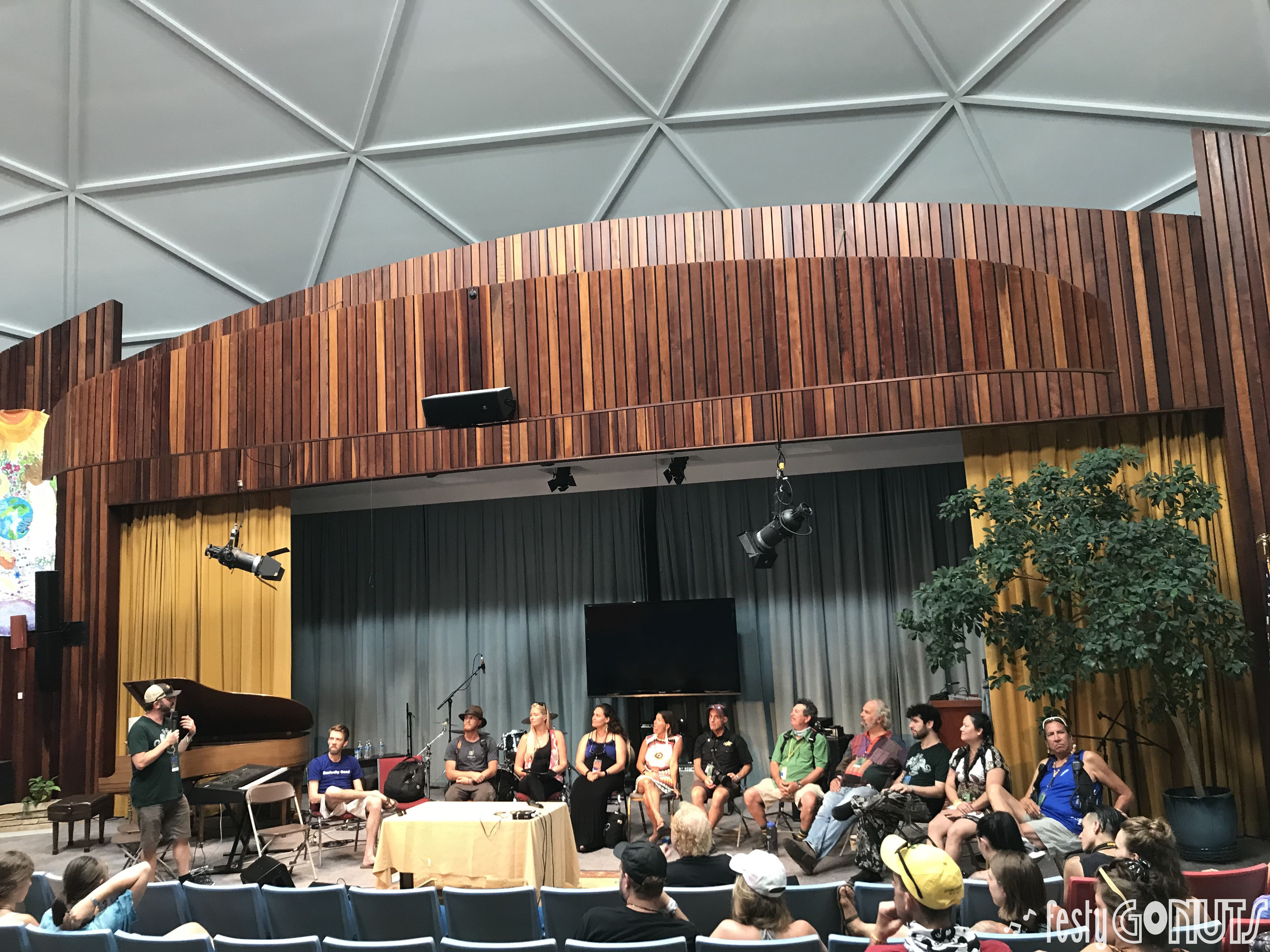 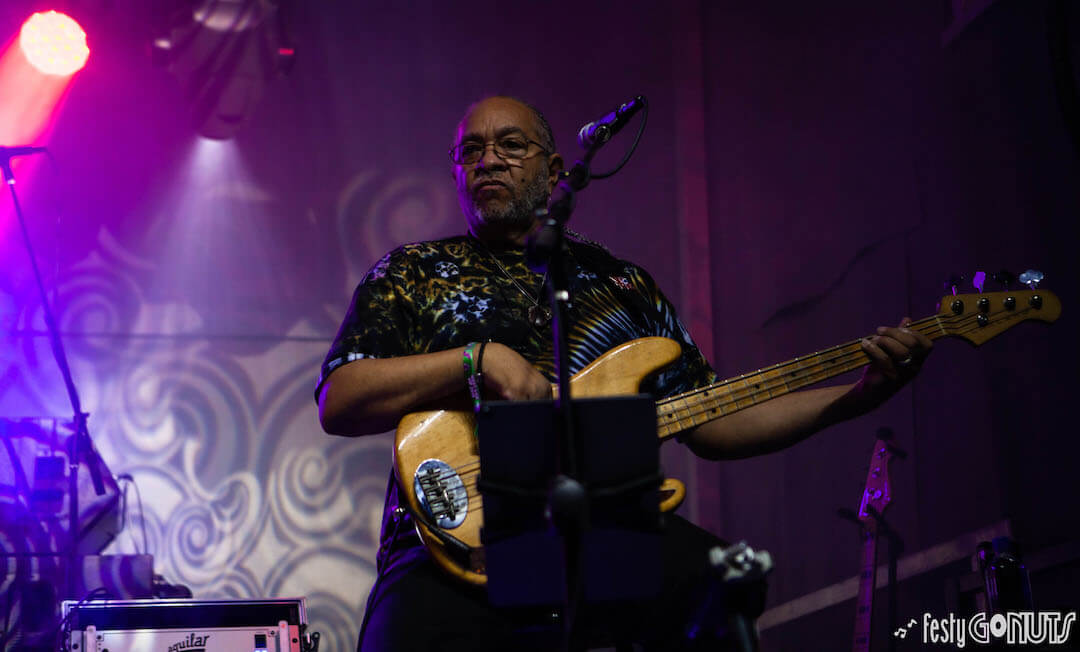 Many people packed up and headed out Sunday morning, either to get back to the work week or because all of their favorite band had already played. The energy shifted, as things were less crowded and music was less rowdy. The lineup for Sunday consisted of more bluegrass bands and less DJ’s or EDM. Clouds and a cool breeze kept everyone comfortable as they blissfully spent their last day on Sunrise Ranch.

Most people’s mornings were spent taking more workshops, yoga, or simply connecting with new friends.  At noon, there was a children’s talent show at the Pirate Stage. Children of all ages performed through all mediums with more confidence and enthusiasm than I have ever seen before. It was truly magical.

One mother and staff member mentioned that Arise completely changed her daughter’s life, and mader her the confident and eccentric girl she is now. Throughout the entire weekend, there was a Children’s Village making the festival very family-friendly. This aspect is not only to help children grow, but to bring that young and light-hearted energy to the valley and remind the adults of the beauty in simplicity.

After the show, Pixie and the Partygrass Boys (from Salt Lake City, Utah) set up their set to bless the tent with some bluegrass, as they sang about love, growth, and the Mormons of Utah. The crowd sang, danced, and laughed along with them. The band explained the term “partygrass” as exactly what you’d imagine it to be: music and shenanigans.

On the same stage shortly after, Bridget Law came up with friends from different bands to play originals and classic covers from artists such as Bob Dylan. While they jammed out, Satsang took Eagle Stage.

Near the end of Satsang’s set, they asked everyone to think of something that they’ve been holding on to that is no longer serving them, and on a count to scream as loud as possible and let it all go. The crowd roared as the band played and then many people broke out in tears. This moment in itself sums up the entire experience of Arise for many. Relief.

Railroad Earth then got up to play their first set, and then their second. With room to play, the crowd spread out on blankets and tapestries, while people ran around, danced, juggled, hula hooped and painted on their easels or each other’s bodies. A solid few hours of expression and creativity with the live soundtrack from a headliner that left nearly everyone in emotional awe.

All 100 members of the Arise staff then came onstage for the closing ceremony, called the Moment of Unity. One man on stage said “Everything in the past is a memory, everything in the future in a dream, all there is is here and now. Doesn’t that make you feel wonderful?”  They then brought up a speaker who had traveled all the way from South America to share her thoughts on a better world, and how our children, and children to come, deserve it.

The floodgates to our hearts didn’t stop there, as our night continued with Rising Appalachia at the Terrapin Stage. Lyrics about resilience, vulnerability, social and environmental justice filled the valley like a wave of fresh air. A perfect match for a festival rooted in such values. 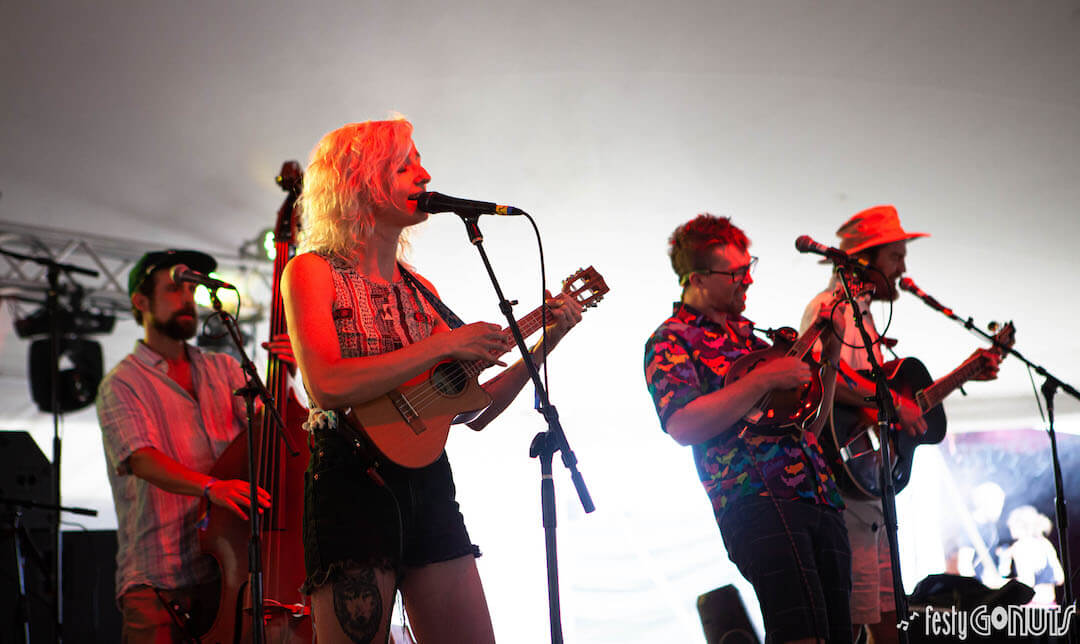 Though many of us may have come to Arise for the lineup, we found much more than epic beats and melodies. Being free of judgement and surrounded by so many open-hearted people led us all to experience divine human connection for a weekend.

There is truly something special about this festival, as it is much more than a music festival, but an outlet for expression, creation and love.

I hope we all took a piece of this mentality home with us. 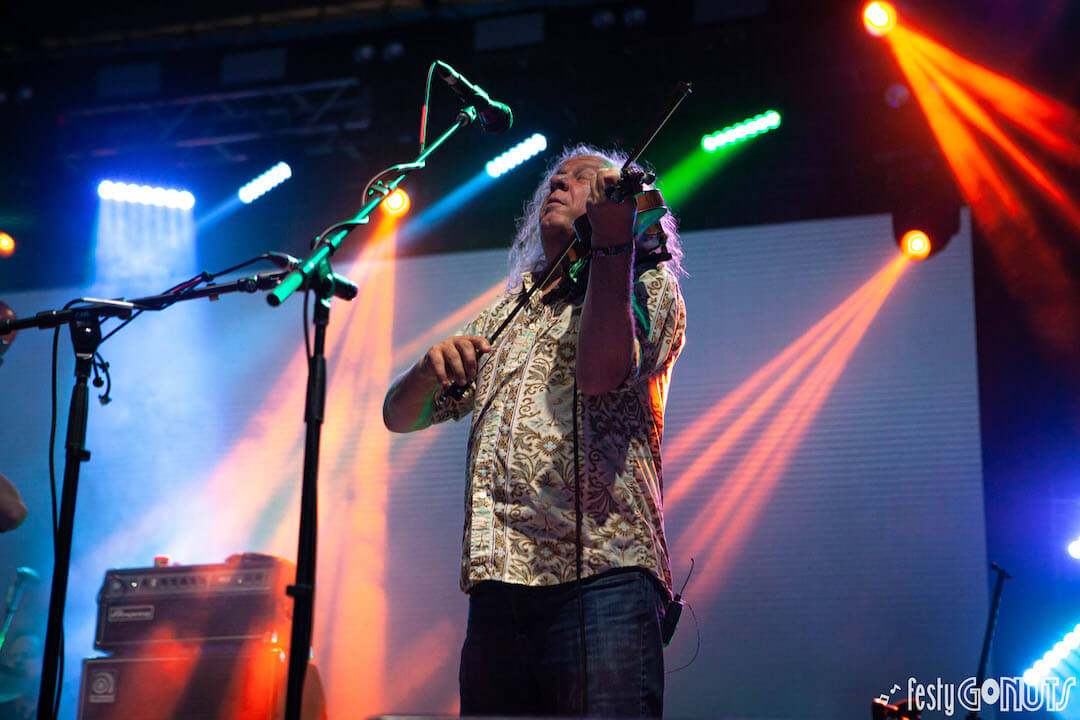 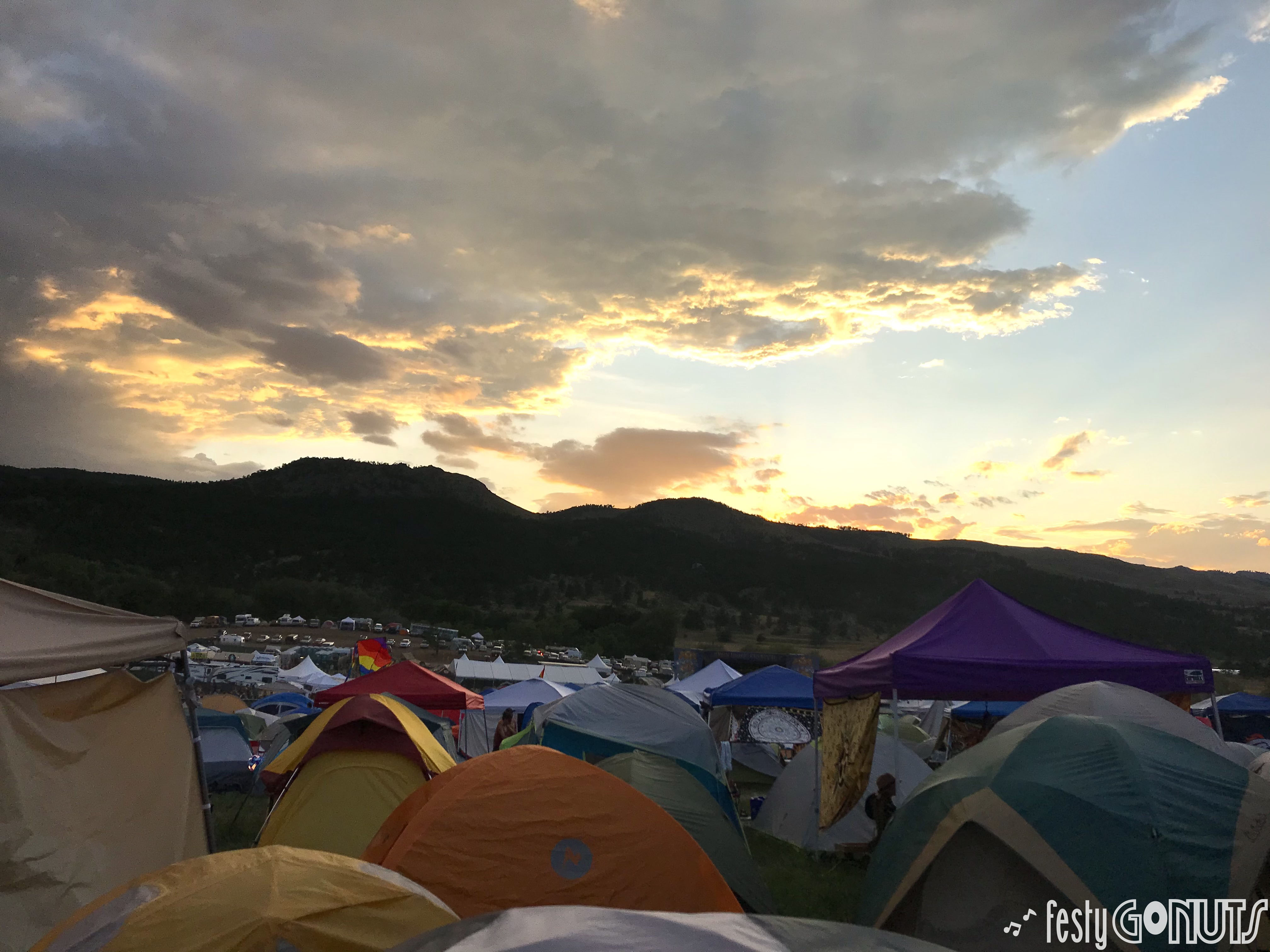