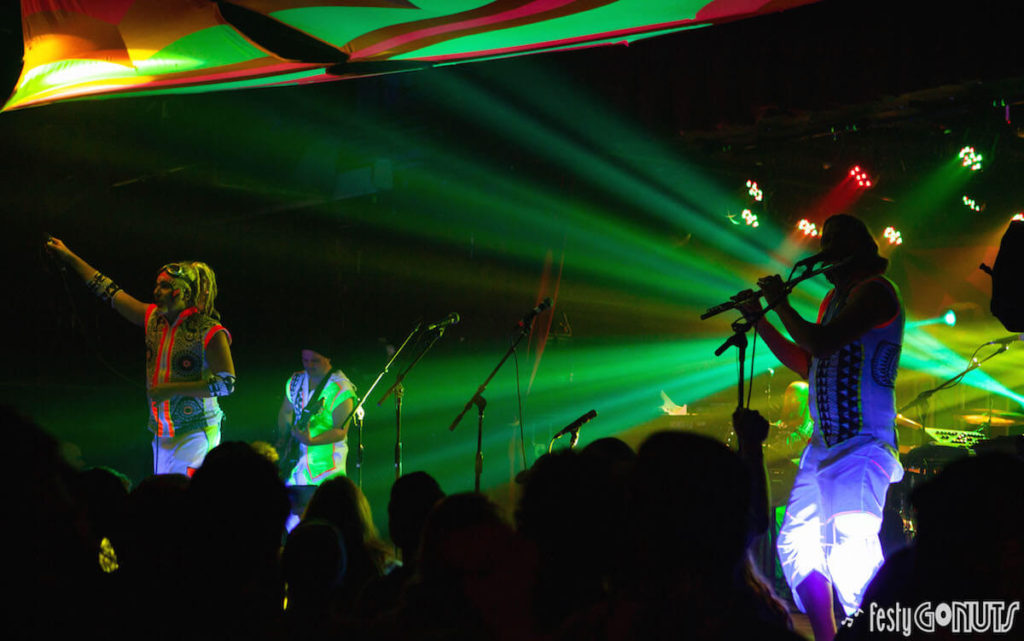 Spread the Word Festival Echoes in the Concrete Jungle

Denver’s Spread the Word Festival Echoes in the Concrete Jungle

There was ample fun to be had in the city for the seventh annual Spread the Word Fest in Denver this weekend! 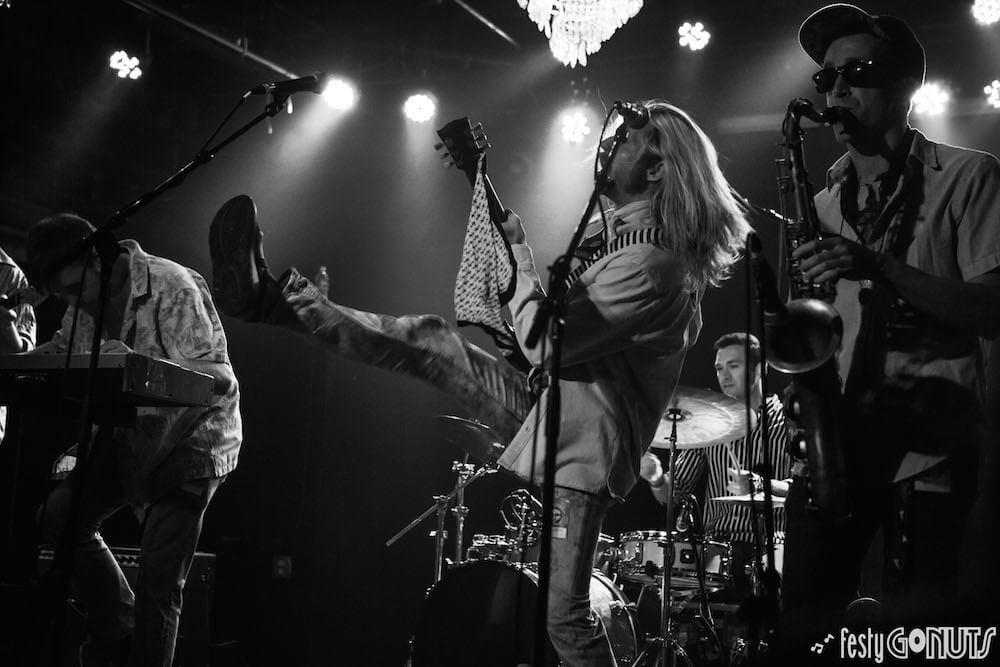 Friday night the Spread The Word festivities were held at the Cervantes Ballroom, on the Other Side’s stage, and on their outdoor patio. The evening started out with bluegrass from Modern Whiskey Market who seemed like old friends having a great time. Indoors on the Other Side’s stage, the crowd sang along to Graham Good & the Painters from Fort Collins. Their funky seven-piece act includes eponymous lead singer, with his infectious charisma, rocking out in Tevas while sticking out his tongue, rhyming into a ska feel and then handing it over for an electric guitar rock solo reminiscent of Queen. He told us all to “Leave your problems at the door,” which was easy to do while enjoying the strong musicianship from the UNC graduates with their perfect synchronicity on rhythmic runs.

The crowd was festival ready, from butterfly wings and rainbow hair to other unique outfits like green and blue-striped overalls and glowing glasses. There were vendors and artists set up by the street art murals and the vibe was friendly and funky, especially on the patio. Pick & Howl with banjo, mandolin, slide guitar, stand-up bass, and acoustic guitar covered the classic “After Midnight” and played a bluegrass rendition of Happy Birthday after encouraging us all to howl at the full moon that was visible through the clouds. Later the patio would be silent except for those with headphones on to experience the silent disco lead by three different DJs. 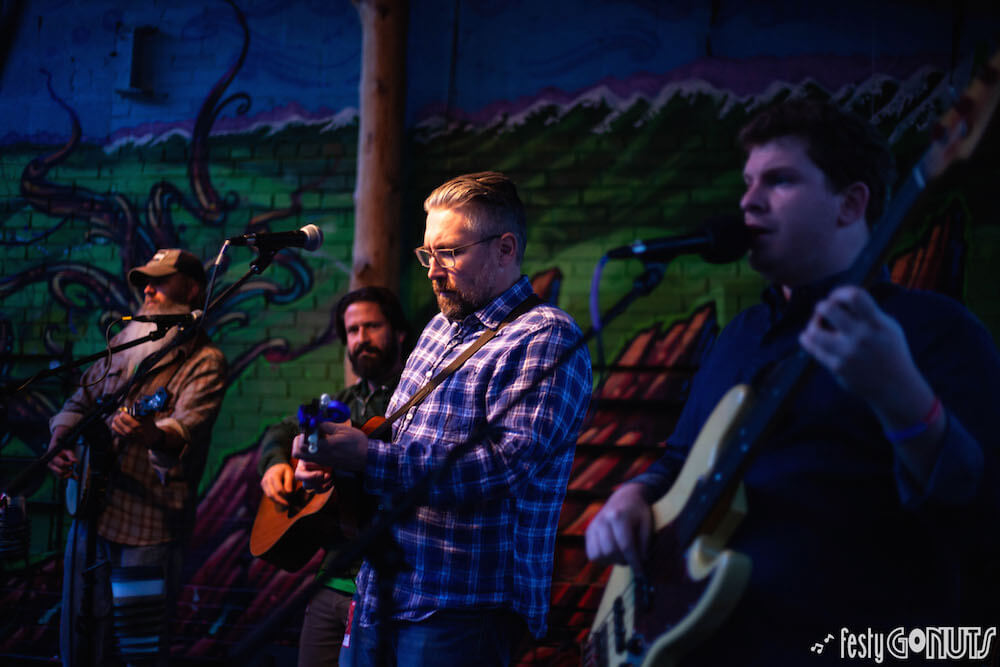 Inside the ballroom, under the largest disco ball I’ve ever seen, A-Mac & The Height from Denver brought two saxophones to their crew on stage to fill out the band’s reggae feel. Following them on the mainstage was Mike Love, who mixed in a cover of “Free Bird” while exploiting his effortless falsetto and ability to fall in and out of it. With just himself and longtime drummer, Sam “Ites” Gonsalves, who mostly drums and plays symbols with his bare hands on stage, it felt like church in the crowd. As Mike Love sang about making this world a better place and putting his ego aside, the good music came through, and just as it inspired, spoke to, and healed Mike, it also helped lift each one of us in the crowd higher. Mike, the scat master, performed his incredible looping manifesto and sang about how we need to “Take back the knowledge and power, humanity don’t let this be the final hour.”

Meanwhile, on the Other Side, Analog Son brought some sultry, soulful female vocalists to the table to complement the sax, electric bass, drums, trumpet, keys, and killer electric guitarist. The ladies’ dance moves were sassy, sexy, as they strutted all their stuff which encouraged the whole crowd to get down. Yak Attack followed with their experimental, upbeat three-piece live band electronica sound. 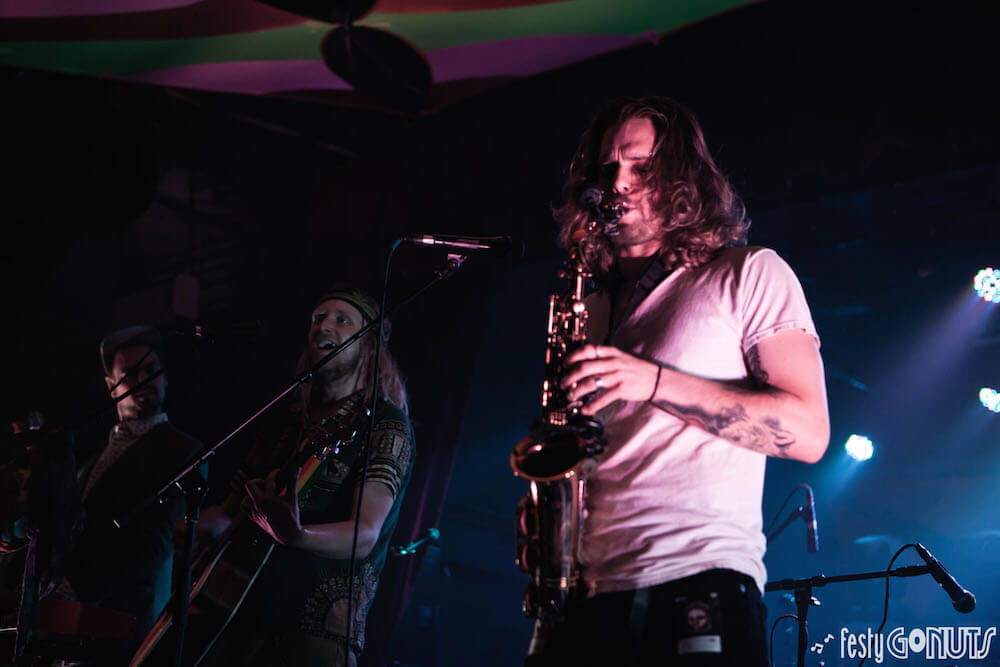 To wrap up the night at Cervantes, Wookiefoot jumped onstage with their jetpack of smoke and blacklight reactive beauty. Lead singer Mark looked comfortable in the front row with the crowd while singing their positively catchy tunes. Dancers with LED poi and colorful fans amped up the party while the songs with rhymes about GMOs and the food train, and how it doesn’t matter who you are or where you go, made the whole crowd move together. They talked about how Colorado is their second home, and mentioned their non-profit, bethechange.org in between playing their hits, brand new songs, and a couple of covers.

Multi-instrumentalist Joe Mechtenberg played alto and baritone saxophones, flute, tambourine, and electric recorder with genre-spanning ability, from haunting tones to danceable riffs and everything in between. Patrick on bagpipes added another layer along with their trumpet player, and the beautiful Maya who added vocals on a few songs along with Peewee Dread, an African American singer/rapper who wore a black starry cape, barely concealing his six-pack and waist-length dreads. 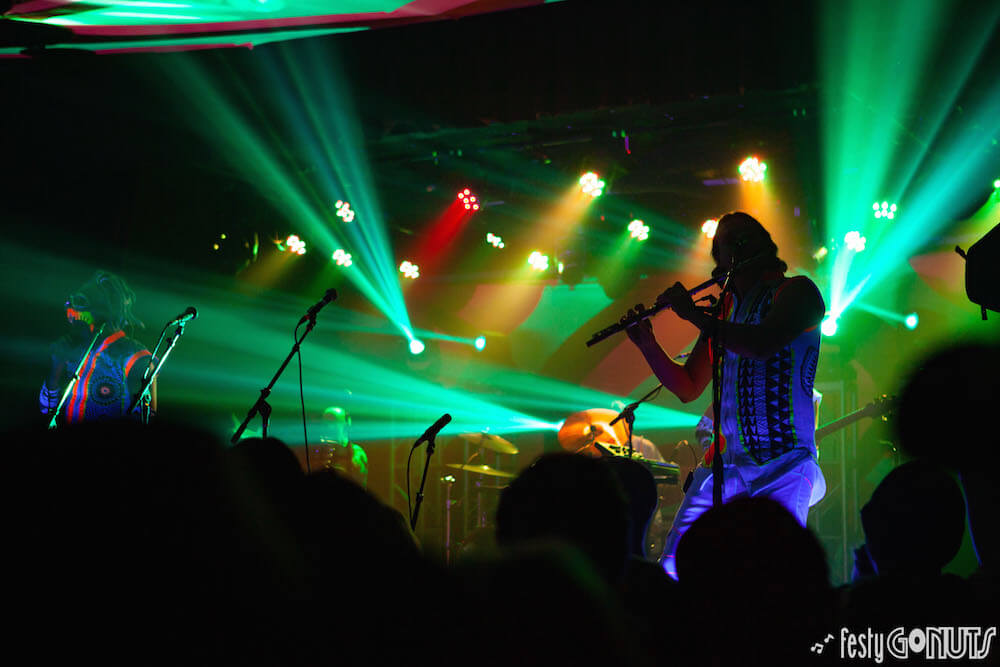 Saturday, under I-70 outside the Coliseum, Spread the Word Fest continued through the windy, cloudy, cool, and sometimes warm and sunny weather. A beautiful mix of merchants showed their wares at the artisan village, created live paintings, food trucks and other vendors shared their offerings, and the crowd was full of smiling faces, especially on the bicycle rickshaw. Three stages backed to each other under the highway and the mainstage benefited from the warmth of the sun during the day.

Metafonics started the day out with a groovy and chill rock vibe, but still almost blowing out the speakers with their punk style vocals and on point band of keyboard, bass, guitar, and drums. It was perfect to warm up in the sun and hoop to. The Brothers of Brass opened up the west side 303 stage, playing that funky music from Denver with two trumpets, two drummers, two trombones, a tuba, and a soprano and tenor saxophonist. They took on a cover straight from New Orleans, played some originals, and after the trumpeters wailed like it was a competition, they fist-bumped after their display of talent. The brotherly love was evident with this group, and their bouncy jams warmed up the shady spot. 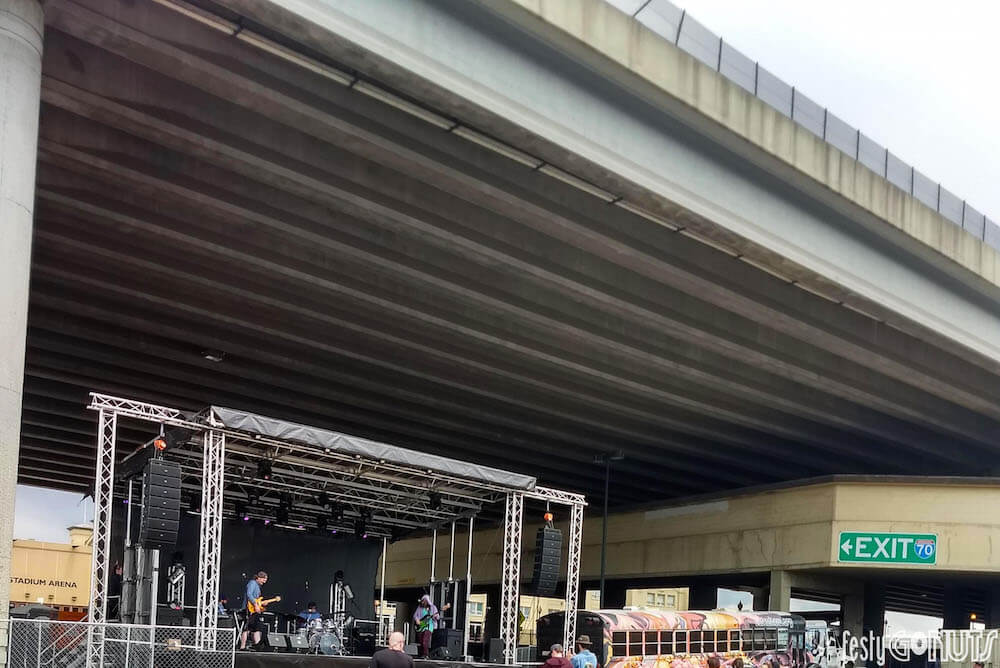 Later, after some delays, Zagriculture brought life to Spread the Word Festival’s I-70 stage in their hometown, featuring a female vocalist with soulful chops and quite the range, tenor sax, trumpet, keys, bass, electric guitar, and drums. Denver band Other Black brought their amazing, weird, wonderful soul music with lead singer, keyboardist, and trumpeter Wes Watkins commanding the crowd. Fellow singer and trumpeter Carrie McCune’s voice was like pure, crisp sweetness pouring out, especially during the love song, “Home is Where the Heart Is.” Wes described their sound as doowop, but then explained that he just learned that “Doowop is just soul music made by white people,” so I think, thanks to him, that it is soul music. He sounds a bit like John Legend but with more grit and rasp, and sings sweet love songs with a cigarette hanging out of his mouth, and a trumpet slung over his shoulder tied with a rope. Electronic sounds came out of his tiny keyboard and electric organ, and he laughed and said that he was “just making stuff up,” we all, as a crowd ate it up as we witnessed what seemed like pure genius on stage.

Denver singer Rob Drabkin played a couple of new songs along with a keyboardist and drummer, including the beautiful, “Love Letters.” He’s like a minstrel on guitar, and his voice is full of sincerity, with a gorgeous tone. His cover of “Diamonds on the Soles of Her Shoes” would have made Paul Simon proud. TNertle, BoomBox, Future Joy, Gasoline Lollipops, the festival’s own Family Band, The Reminders, and several others rounded out the night on Saturday. On Sunday, the party moved to the Levitt Pavilion and featured performances by the Drunken Hearts, 40 Oz To Freedom, Juno What?!, Rebirth Brass Band, and Karl Denson’s Tiny Universe. 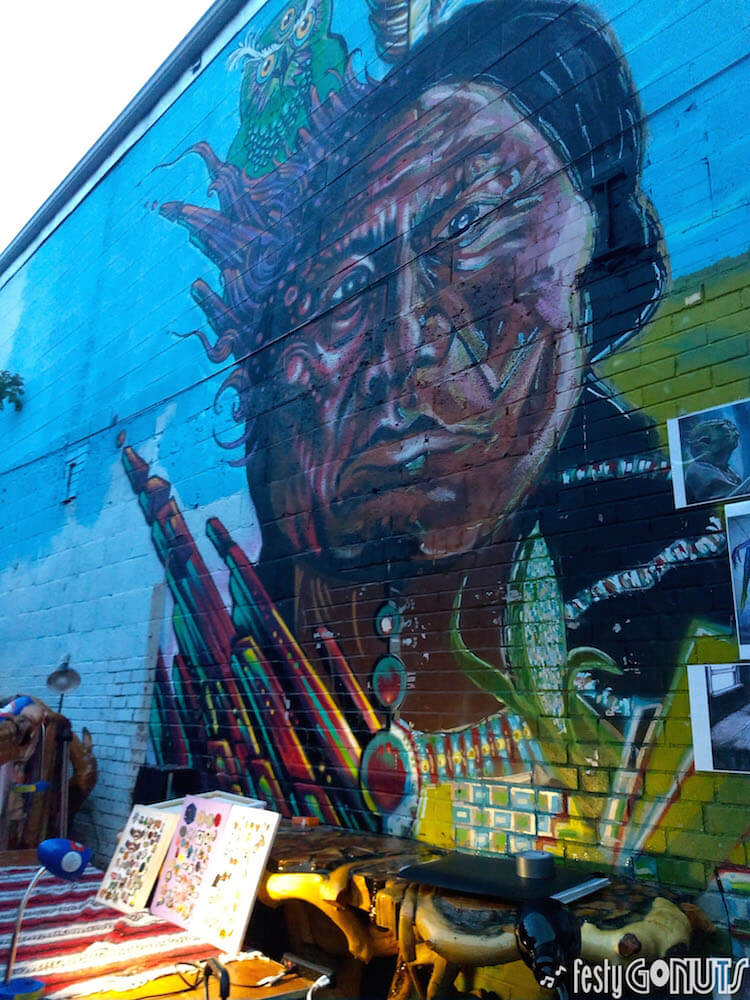 I pondered the question this weekend, “What’s the word that we’re spreading?” Is it music? Community? Music-unity? Co-Music-ity? Saxophone? Colorado? The answer to all of these is yes. Experience the community in music that we have at our fingertips in Colorado. There is ample opportunity to revel in the talented folks that call this beautiful state home, or in some cases, second home. And in doing so, to meet awesome people and see one-of-a-kind art. Cheers to Spread the Word Festival,  one of the first of many Colorado festivals to enjoy in 2019!