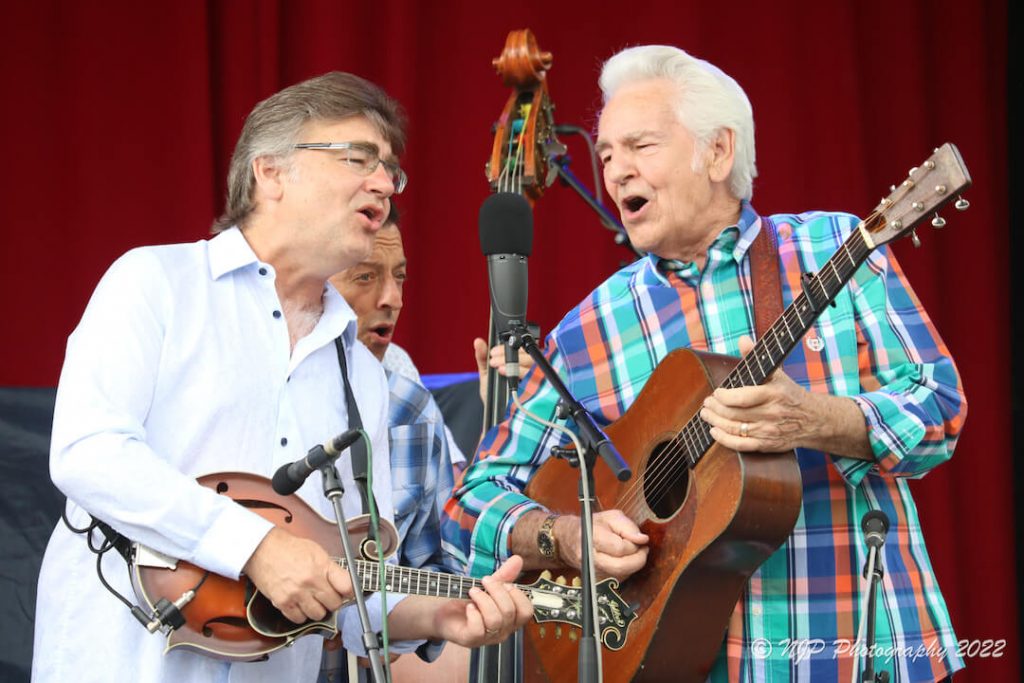 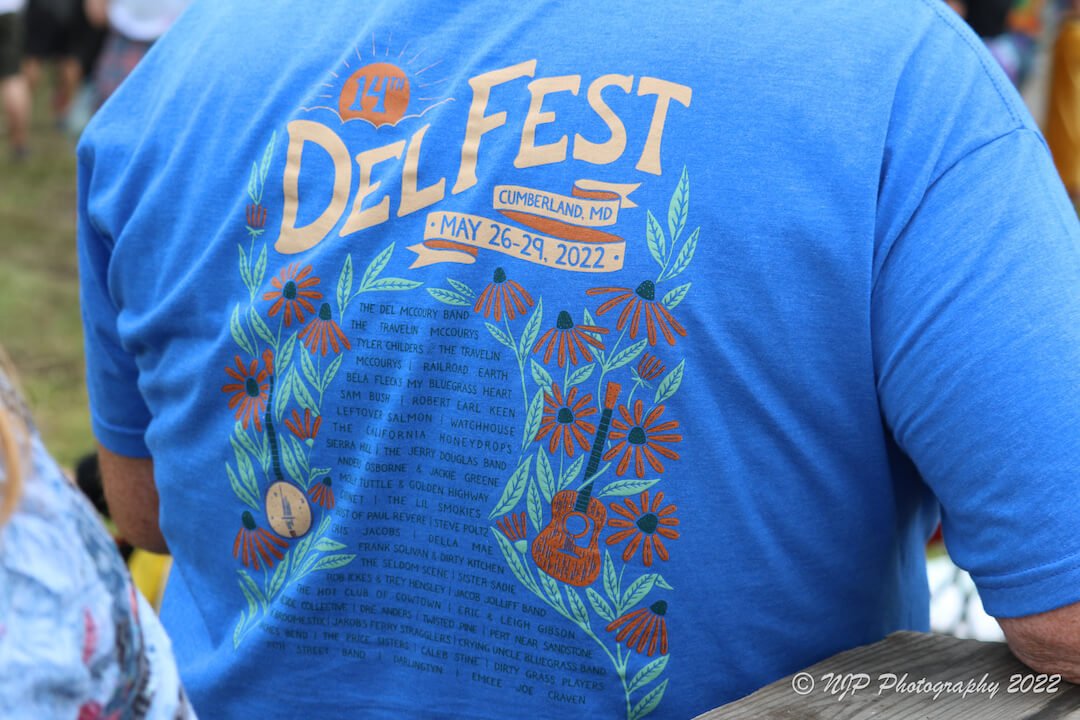 Like all festivals, tours, and plans, the annual Delfest in Cumberland, MD, faced several reschedules before finally going ahead this past Memorial Day weekend.

The Allegheny County Fairgrounds came alive with grateful fans and bands who all expressed their gratitude for being able to be there. This epic site has been hosting DelFest for over a decade and in turn, offers its natural haven for Del McCoury to curate a line-up that reflects Bluegrass and Americana at their roots, and where it’s grown.

This year’s line-up was a Magic 8 ball of hand-selected artists that represent both the past and future of this multifaceted genre.

With changes in dates and years, though landing back on its annual weekend, came slight changes in the lineup that was announced for 2020 but no loss of quality. (In fact, this author had her own changes since the original announcement and wasn’t able to attend the whole event, so what follows is a community-driven recollection from Deltopians of the best moments at Delfest this year.)

Hosted by Del and his band, as well as his sons and family in the Travelin’ McCourys, it started Thursday with a soundcheck set from Del where fans shouted requests and gleefully welcomed each other back to the infield of their beloved racetrack. Fireside Collective, which camper Chris highlighted as his favorite, played their first of two jammy sets before Anders Osborne & Jackie Greene brought their duo show to the Delfest stage. In a raw and gritty 90 mins, these two created the sound of a 7-piece band with only their bassist Jonathan Sloan as support. 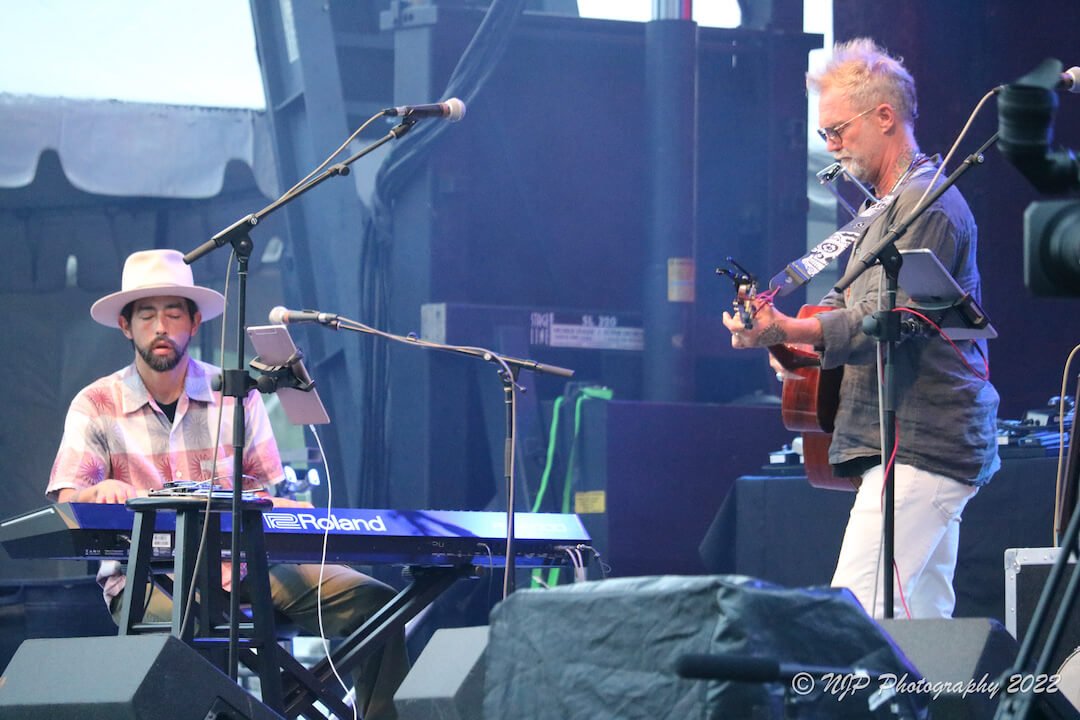 Headlining on Thursday was Americana legend Robert Earl Keene, who has spearheaded the genre since the ‘80s with 20+ records under his belt and is touring for the last time this year. His set included many of his biggest hits, like “Feelin’ Good Again,” “Corpus Christi Bay,” and “The Road Goes On Forever.” After that, folks dispersed back to camp or hit the late night barn for a rowdy Leftover Salmon set with special sit-ins followed by The Lil Smokies to bring night one to a close.

Friday started bright and early, with a nonstop barrage of amazing music to see on every stage. Highlights included Cris Jacobs, Pamela’s favorite set, featuring “powerful and provocative lyrics.. expos[ing] the hypocrisy of private interests.”  Robin and Stacey agreed that his song “Talkin’ NRA Blues” was a bold and important addition. In the Music Hall, the Gibson Brothers and Vince Herman served up Songs & Stories, while comedian-folk-poet Steve Poltz was singing with fans in the crowd at the Potomac Stage, which Deltopian Kerry said was her favorite moment. Dobro wizard Jerry Douglas and his band lit up the mainstage with bluegrass classics among his widely-covered originals, like Kenzie’s best memory- a performance of “Sailin’ Shoes” with Sam Bush, which she never thought she would get to see live. 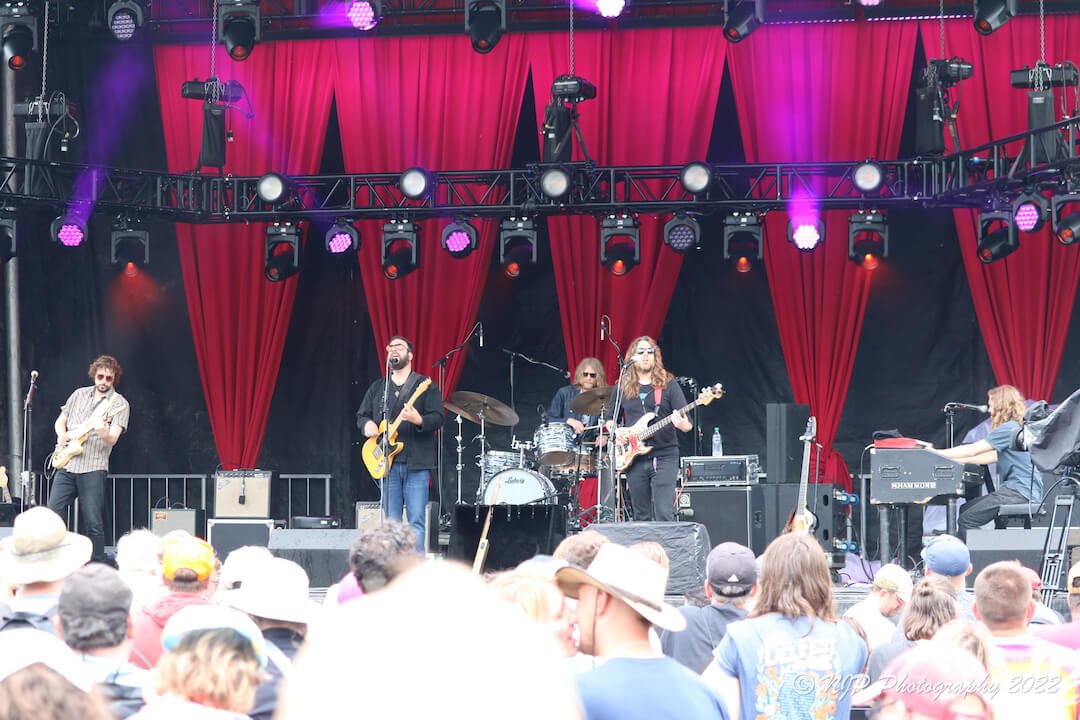 Some Deltopians opted to spend the first half of the day cooling off in the Potomac River. Samantha and Kathleen treasured these moments of sitting in the water, listening to people make music and watching the kids (and adults) play. Benjamin was lucky enough to hear The Price Sisters singing on the river, his first but far from last show of theirs. Amanda and her friends wandered the campgrounds and were treated to unscheduled pop-up shows from The California Honeydrops, as well as groups of campers picking their own tunes at their sites.

Back at the music, Pennsylvania-favorites Cabinet played one of their rare reunion sets to a wildly supportive crowd of die-hard fans before Béla Fleck spilled his bluegrass heart out on stage.

The Delfest rain appeared, which campers have come to know if not love, for Bela’s set but that didn’t stop Benjamin and Kenny from calling this their favorite moment – a cover of “Big Country” with John Hartford’s own banjo taking the lead.

Del McCoury Band had another beautiful sunset show and Leftover Salmon closed down the main stage with their zydeco-stained mountain boogie ripe for a Friday night.

For late night, Deltopia was served a giant heaping of Railroad Earth, who brought the house down with their highly-sought cover of “Terrapin Station.” Mike put it best in his recollection of the set when he said “smiles erupted and more than a few tears of joy fell” for their “much-anticipated return to the late-night stage.” Fans like Valerie, Sherri, Britt, Maria, and Michael agreed and exclaimed how special this hit-filled set was.

Though it was hard to follow, Frank Solivan & Dirty Kitchen came out with an excitement that was unheard of for a 2 am start time. 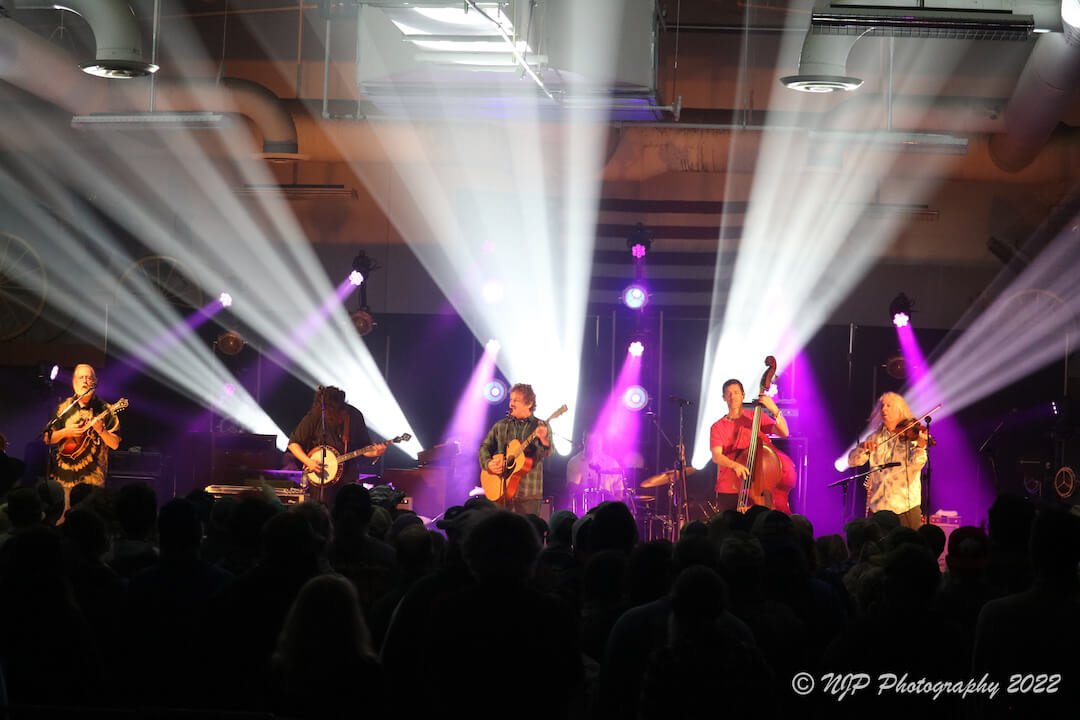 Saturday was another fully-loaded day, with overlapping sets of difficult decisions.

Even before the music started, little ones were already running around with noisemakers, water toys, fairy wings, and tiny hula hoops. Fans Courtney and Tim brought their daughter to her first Delfest, a weekend they have shared with their extended family since the early days, and she quickly became an on-screen star with her bubble machine. Pre-show camper musings also included group drum sessions with Rhythmetrix, a stop by the newly-remodeled showers, and dropping off donations to the community foundation, Del’s Army.

Caleb Stein was the first artist of the day, Matthew and Stacy’s favorite for a little something different. Stein didn’t stop playing after his set though, and instead popped by campgrounds to jam with fans like Pamela.

The Price Sisters kicked it off at the Potomac Stage between the Grandstand and the Music Hall, impressing new fans like Kai, who said “those twin sisters have some amazing voices.”

The Dirty Grass Players had their Delfest debut, which was well-recieved and well-earned at that, say Juliette and David. Sue and Dave’s favorite band Della Mae returned to the festival this year before Watchhouse (formerly Mandolin Orange) played their first Delfest set under the new moniker.

Ghost of Paul Revere played their last Delfest set this year, calling it quits after this tour, much to the chagrin of many in the crowd.  Jacob Joliff brought his band to Cumberland for their debut, though Jacob himself has graced the stage many times, most notably with Yonder Mountain String Band the first year after Jeff Austin’s departure from the band.

Queen mandolinist Sierra Hull worked up a huge crowd for her prolific playing before Railroad Earth’s Grandstand show. The California Honeydrops were finally scheduled for the main stage and brought a pandemic’s worth of sexually charged energy, delivering horn-laced, reinvented blues tunes and west coast soaked originals about all sides of the love game. The Travelin’ McCourys were charged with the peak Grandstand set on Saturday and they took that responsibility seriously, inviting countless pals including their patriarch to join them. 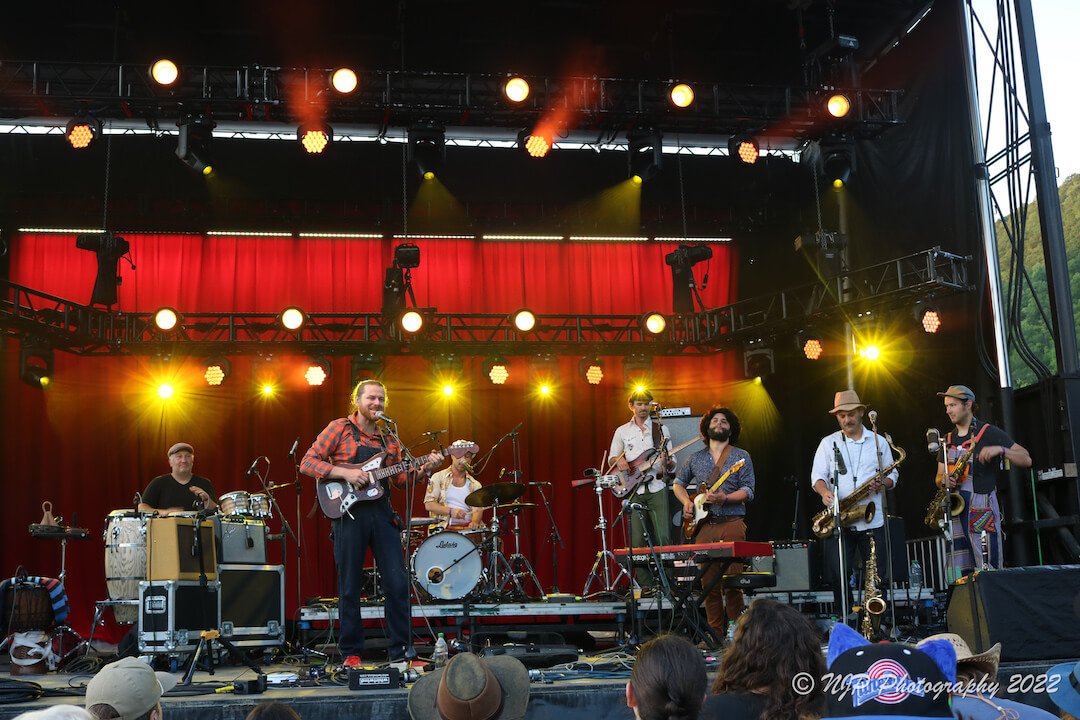 Sunday morning heard the beautiful sounds of Dre and Gospel Collective to open the day. Dre Anders is not only a beloved songbird of the extended Delfest family but also an active member of the Deltopia community, which speaks to the bond among attendees that this festival has curated.

The last day of the event was just as packed and joyous as the rest, seeing more people flood in for the night’s headliner than any previous day. The Seldom Scene returned to Delfest this year (where they are not quite seldom seen), an appearance made even more special by the fact that Jay Starling, son of the Scene’s founding guitarist John Starling, was there as the newest member of Leftover Salmon.

Molly Tuttle & Golden Highway had an exciting main stage set, and Deltopian Bennett loved the music from Twisted Pine, which included a rarely heard flute mixed in with the stringed instruments.

For Sam Bush’s set, the mandolin master took the stage alone, and fans instantly knew this would be a star-studded show. Josh mentioned how “awe inspiring” it was “to see one of the greatest put that much spirit into everyone’s heart just by himself.” Del joined Sam for a few selections they’ve been playing together for ages, and the crowd went wild when Sierra Hull and Ronnie McCoury appeared. Deltopians Mark and Corey note this as their favorite moment – “the three best mando pickers in the world sharing the stage, shredding our faces off and goofing around.”

Del McCoury and his family band played one more set on Sunday evening, including a performance of his hit “Hotwired” with the extended family which was Robert’s favorite moment. For Carolyn and her kids, their favorite moment was the last main set – Tyler Childers performing with the Travelin’ McCourys and Del, including a cover of The Grateful Dead’s “Greatest Story Ever Told.”

Late night saw a surprise rock n roll show from The Davisson Brothers Band before The Travelin’ McCourys closed it down with as much vibrato as every other ounce of music they played in the weekend behind them. Putting a perfect ribbon on the whole affair, the unstoppable California Honeydrops were once again caught, unplugged and unpredicted, singing the fans home outside the Music Hall on Sunday night. This was the favorite set for Marc, Michelle, Rachel, Els, Tom, Josh, and as it turns out, the Honeydrops as well.

It’s their favorite event of the whole year, the best annual way to kick off summer, and nothing about having to take 2 years off changed that.

It’s hard to imagine how DelFest 2023 will top the return this year, but if anyone can do it, it’s Del McCoury and his team at DelFest. 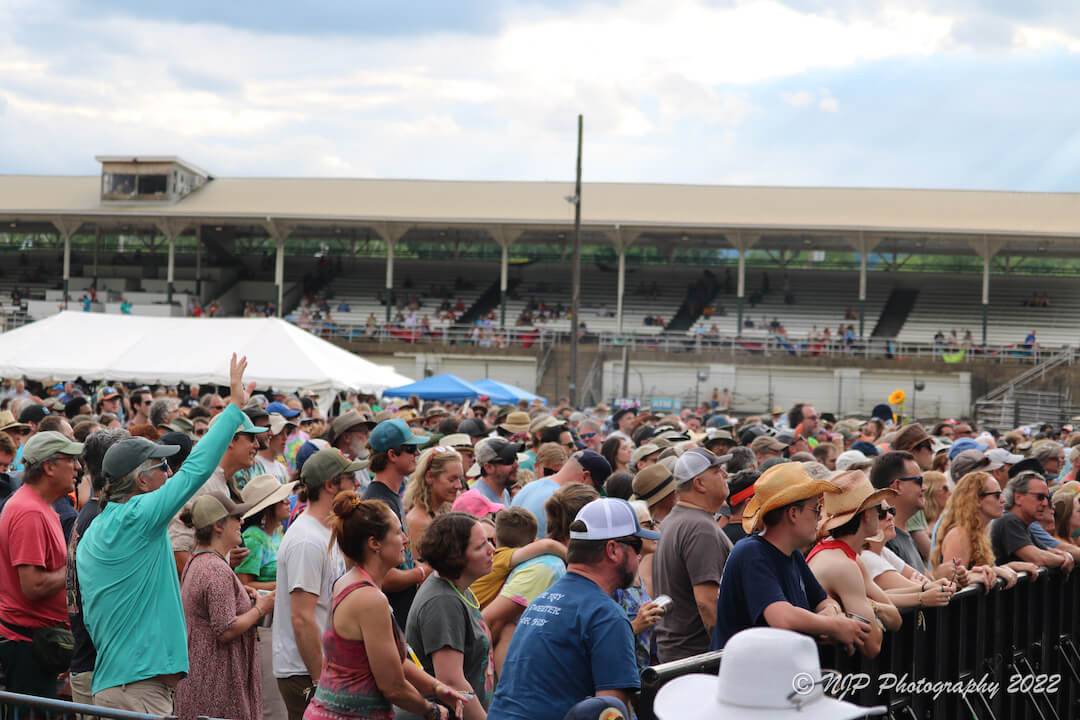 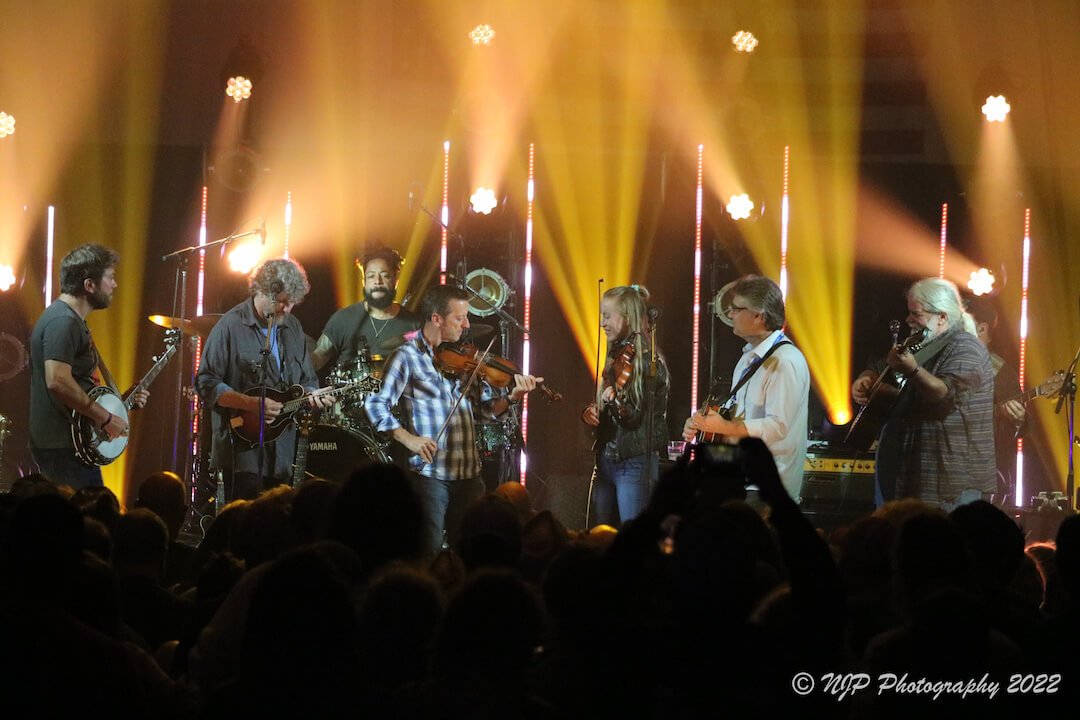