The Gem and Jam Festival will be returning to Tuscon, AZ at the Pima County Fairgrounds on January 31st – February 2nd, 2020.

After taking a year hiatus, this well-loved music festival is excited to announce its return – along with its initial artist lineup.

“We are beyond excited to be able to bring Gem & Jam back for an epic three nights in the desert,” says festival co-producer Josh Pollack. “We have the best fans out there and cannot wait to share all we have planned for 2020.”

Other artists announced include: 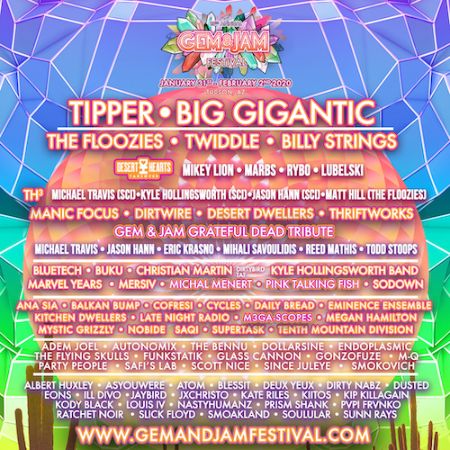 Gem and Jam has historically been held at the Pima County Fairgrounds located just 20 miles South of downtown Tuscon, Arizona.  The desert environment is spread across 640 acres surrounded by nature, allowing plenty of space for art installations, multiple stages, and camping options (including car and RV camping).

Gem and Jam festival is not just about the music.  It takes place during the annual Tuscon Gem, Mineral and Fossil Showcase, which attracts over 55,000 gem lovers to the Tuscon area over a 3-week period.

In addition to the Gem and Mineral show, the festival will showcase art installations and performances, workshops, lectures, and many forms of artistic entertainment.  Additionally, expect several delicious options from the on-site food and beverage vendors.

Get Your Gem and Jam Tickets!

General Admission tickets are on sale now for $159, plus fees. Camping options are available starting at free walk-in camping with a $20 parking fee, car camping and RV options with hook ups. Hotel and ticketing options, and payment plans are available.

For all ticket options, visit www.gemandjam.com.