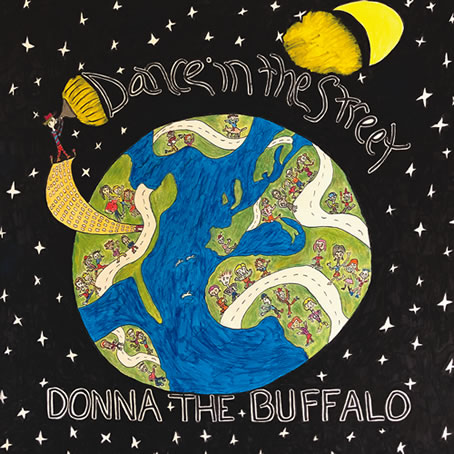 Interview with Tara Nevins from Donna the Buffalo

We chatted with Tara Nevins as she was driving to upstate New York to jump on the Donna the Buffalo tour bus.  The band and crew were headed to Chattanooga, TN the next day to play a few shows and film a music video for a song off of their new album “Dance in the Street”.   Tara discussed how the band has managed to tour relentlessly for almost thirty years, and she shared details about the incredibly unique experience of recording their latest album at Sonic Ranch Studios with Rob Fraboni.

Donna the Buffalo stays busy touring these days – and really hasn’t stopped being on the road for the past 30 years.  Tara Nevins co-founded the band with Jeb Puryear in 1989, and they bought a tour bus after their third gig.   Their gypsy-like personalities bonded after first meeting at an old-time fiddle festival, and the band grew from those traditional roots.  So, it makes sense that they spend so much time on the road doing what they love to do – playing music and being part of the music community.

Living on the road with seven people isn’t always easy, but since the beginning, the band has tried to keep their entire operation grassroots. They’ve hired friends and family members to be the driver and the mechanic, and they try to manage everything themselves. That grassroots mentality is what has kept the band going for the past 30 years.

Their personal connections go beyond the touring crew, however.  Tara passionately shares that the fans of Donna the Buffalo are a huge part of what has kept them working so hard for the past three decades. “The Herd”, as the fans call themselves, has created a “Donna the Buffalo” community that is overflowing with love and support for their favorite band.

“The Herd has been with us all along. And we’ve made such wonderful friends – and it’s such a great community, or migration, as you’ll have it.   We can’t let them down!   We’ve got to keep going.”

The Herd has literally kept them going –  after Donna the Buffalo’s old tour bus finally died in 2016, a Go Fund Me campaign was started to help the band purchase a new bus.  Their fans donated $90,000 in a short 3-weeks, and the band was able to continue to tour all around the country.  Not only does The Herd come together to show support to the band, but the fans often group together to raise money for local charities and organizations.  They aren’t just a fan group – they are an extension of the band itself. And that level of dedication has given Donna the Buffalo the validation and the support to keep traveling and performing for thirty years.

Touring isn’t all that Donna the Buffalo is passionate about.  Only a few years after they started the band, Jeb and Tara started their own music festival with Jeb’s brother, Jordan.  After throwing a successful benefit concert to support AIDS awareness, the group decided to make the concert an annual tradition.  The GrassRoots Festival of Music and Dance was born.

They headlined their inaugural Finger Lakes GrassRoots Festival along with 10,000 Maniacs and Ani DiFranco, and the festival focused on raising awareness and funds for non-profit organizations.  Twenty-seven years later, Finger Lakes GrassRoots Festival is still a non-profit music festival held in Trumansburg, NY.  The music and dance festival now extends over 4-days in July, attracts 17,000 attendees, and showcases over 70 performers.  The line-up includes a variety of musical and dance styles, all seeped in the traditional roots that Jeb and Tara have bonded over since the beginning. You’ll find zydeco, Cajun, honky-tonk, bluegrass, old-time Americana – a perfect blend of traditional and contemporary musicians and artists that attracts people from all walks of life.do it on

When asked how the band manages such a large festival while spending so much time on the road, Tara humbly shares that they couldn’t do it on their own. The festival’s success is thanks to the large dedicated crew of employees, volunteers, and community members.  As most things have been in the band’s long history, the music festival seems to be possible because of the band’s strong community ties.

Tara is proud to share that she actively manages the GrassRoots Culture Camp, which is held for the four days leading up to the Finger Lakes GrassRoots Festival of Music and Dance.  The Culture Camp was developed for those who want to hone their music and dance skills.  Attendees have the opportunity to take music, dance and movement classes from talented professionals over the 4-day camp.  What really sets this music camp apart from the rest is the culturally-themed communal dinner and dancing every night. After classes end, everyone is invited to a home-cooked meal followed by a group dance and jam session.  There is a different theme for the dinner and music every night, and the evening events are open to the public as well!  So, attendees may experience a delicious Cajun meal prepared by some of their favorite Cajun musicians – and then wrap up their evening dancing to some cool Cajun beats!

As if that isn’t impressive enough, there are now multiple GrassRoots music and dance festivals around the country.  The Shakori Hills GrassRoots Festival is held in Pittsboro, North Carolina in May and October, and the Virginia Key GrassRoots Festival is held in Miami and Key Biscayne, Florida in February.  Each brings together the same vibe and energy that Donna the Buffalo tries to impart at their shows around the country, and they all focus on supporting the local community.

When they aren’t busy headlining their own GrassRoots Music and Dance festivals, you can be sure to find Donna the Buffalo playing many other festivals across the country.  One of their favorites – and perhaps one they’ve played at the longest – is Merlefest in North Carolina.

Tara tells us how much she really enjoys attending Merlefest year after year. “We play several festivals, and there’s a few where we feel like we’re part of the family – and Merlefest is one of those.  We’ve been playing it for a long time. There’s just a lot of love.  And we feel like part of the Merlefest family.”

And they should.  Tara has played at Merlefest since before the Donna the Buffalo, when she was in an all-female string band called The Heartbeats.  The following year, when Tara had formed Donna the Buffalo with Jeb, they were asked to play without hesitation. It’s become an annual tradition for the band. “It’s just such a positive vibe, and it just has such a wonderful history.  And the music is just so fabulous.” 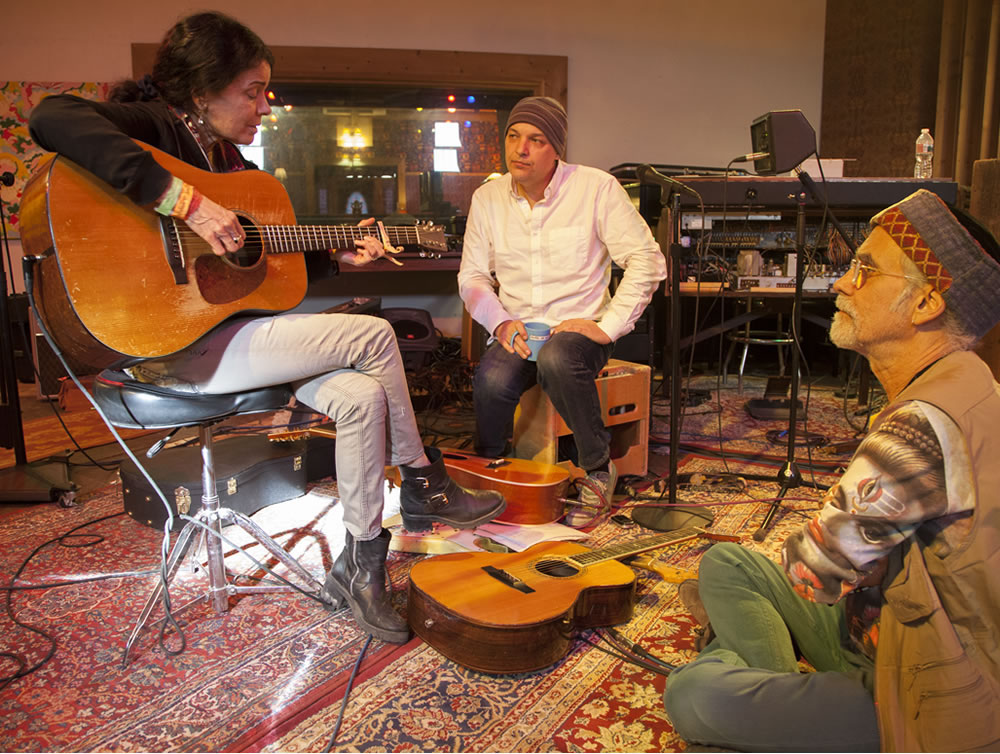 The Recording Process:  Dance in the Street

Donna the Buffalo will be touring relentlessly this winter promoting their new album, “Dance in the Street”.  Released in November, this is the band’s first new album in five years – and it instantly hit the Billboard charts.  The album continues to showcase the band’s commitment to community and social equality while combining sounds seeped in the roots of zydeco, bluegrass, Cajun and more.

Perhaps the most exciting part about the new album is that Donna the Buffalo finally found the opportunity to work with legendary producer Rob Fraboni. Fraboni has worked with some pretty big names in the music industry, including Bob Dylan, The Band, Eric Clapton, The Rolling Stones, Tim Hardin, The Beach Boys, Joe Cocker, and Bonnie Raitt.  And now he can add Donna the Buffalo to that list.

Tara shares that working with Rob was a true honor.  He really connected with the band, and that connection resulted in one of their best albums to date.  “Rob captured a Donna the Buffalo element in our sound, in our vibe, more than any other record.  And we feel really good about that.”

Rob suggested that the band record their album at Sonic Ranch Studios near El Paso, Texas.  The studio is situated on a 3500 pecan plantation right on the border of Mexico, and it is a full recording compound. There are five recording studios, state-of-the-art technology, and even multiple housing options for bands to reside in during the recording process.

Donna the Buffalo planned on hanging out there for about two weeks, but ended up staying for an entire month.

Tara shares that recording the album with Rob Fraboni at the Sonic Ranch studios was an incredible experience for the band:

“The whole band loves the studio and loves the environment.  The people at the studio are very hospitable and welcoming.  We were there longer than we planned, but we were happy to be there.  It was a wonderful time to be there – in Texas in February.”

They wrapped up their album in Nashville, TN with Rob by their side.  Dance in the Streets is a fully analog recording, so be sure to pick up your vinyl copy!

Tara says that Rob is “a real naturalist – real purist – and all about the analog process.  Our record is recorded analog completely from start to finish through mastering the whole thing.  There’s nothing about it that’s not analog.  Our vinyl is completely just like an old-fashioned analog record.”

Speak Out, Stand Up, Dance in the Streets!

As if recording an analog album with Rob Fraboni at Sonic Ranch Studios wasn’t enough to make the newest Donna the Buffalo album unique, one can’t help but notice the intricate artwork on the cover.  This drawing is an original piece by the very talented Tara Nevins – and it’s also the first time she’s ever drawn something on this scale!

When we ask Tara about the drawing, she shares, “I don’t paint, I don’t draw or that kind of thing.  But I do draw these little characters sometimes when I doodle.  And Jeb saw them.”   And they both thought those little characters could maybe help explain the meaning behind the album title, “Dance in the Streets”.

“I came up with the idea of having it be global with having the planet -and having this person standing on top of a tall building come out with a megaphone and saying ‘Dance in the Streets’ to everyone.”  To Tara, the phrase “dance in the streets” is a way of saying “speak out, stand up” to everyone across the universe.

For listeners of Donna the Buffalo, that message comes across crystal clear in their music. 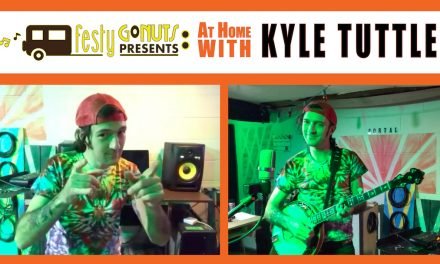 At Home With Kyle Tuttle 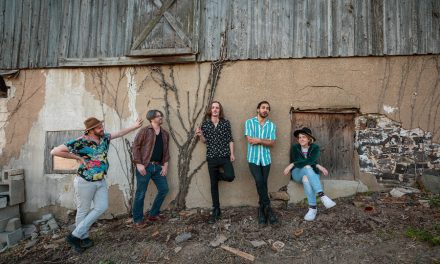 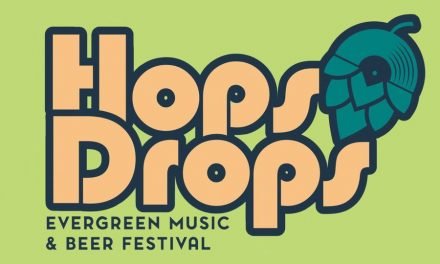 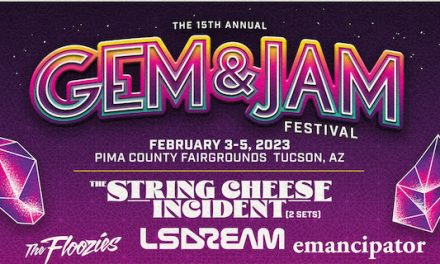