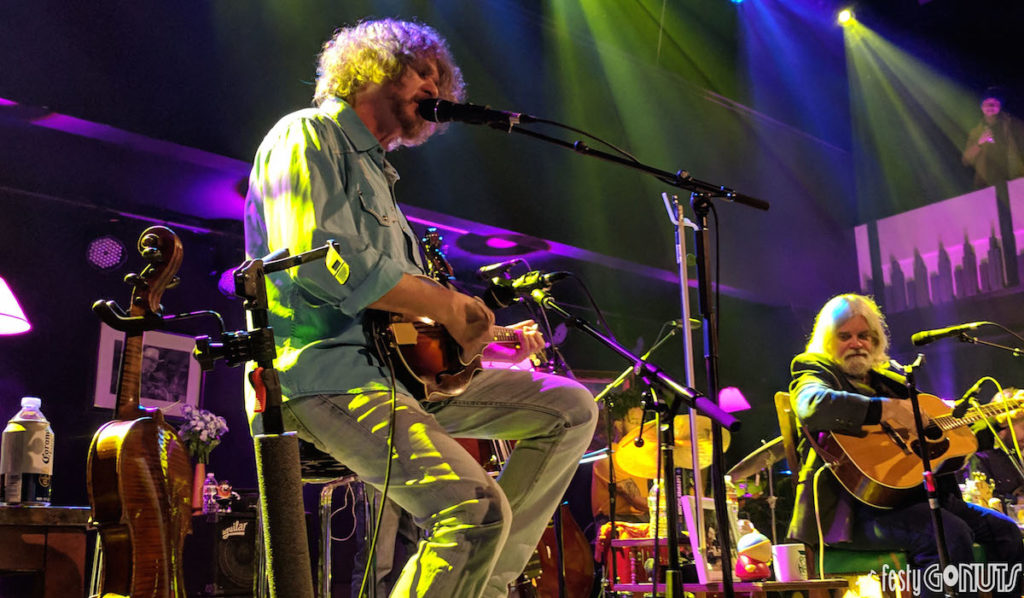 We chatted with Drew Emmitt about the upcoming Boogie at the Broadmoor event, Leftover Salmon’s Stories from the Living Room Tour and the recently published “Thirty Years of Festival!” book about the band’s history.

We caught up with Drew Emmitt (mandolin) while he was taking a walk along the river in Owensboro, Kentucky.  Leftover Salmon is currently on their “Stories from the Living Room” tour, which will continue around the country until the end of April 2019.

These intimate Leftover Salmon acoustic shows feature the band sitting on a stage decorated with comfortable furniture, antique lighting, and living room decor. Between the songs, the band members take a moment to share stories and memories from the band’s thirty-year history with the audience.

But not only is the band seated.  The venues are lined with seats for the audience as well.  And if you’ve ever been to a Leftover Salmon show, you know that audiences don’t typically sit down while the band is playing.

So, how is it trying to get Salmon fans to sit down at shows around the country?

Drew shares, “There’s been a lot of new people that really don’t probably know the difference, so in that respect, it hasn’t been a problem. I think Colorado has been the most challenging place to do it! But at the Vilar Center, we had a huge dance crowd…and in Aspen.  So, it’s nice when we can have room for people both sitting and dancing.  It’s a cool thing!  It’s completely different for us.  It’s not something we’ll do all the time…It’s a special little run.  At some point, we’ll do it again – but we’re not sure when!” 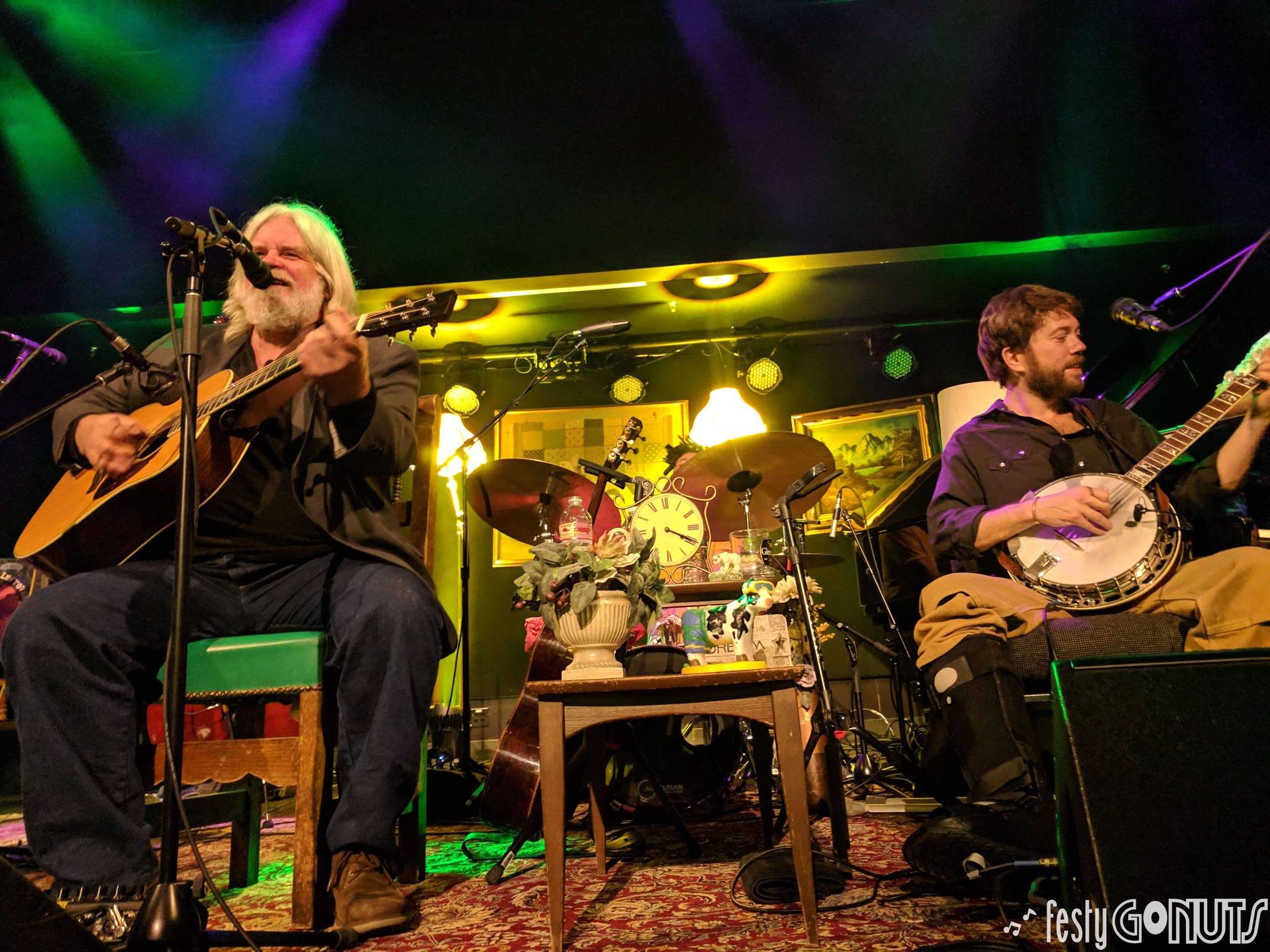 “Thirty Years of Festival!”: A History of Leftover Salmon

The tour was designed to give the members of Leftover Salmon a chance to talk about the experiences published in Tim Newby’s latest book, “Thirty Years of Festival!”  The book details the band’s journey as never been told before, and truly captures the essence of this eccentric band.

Did you think someone would write a book about the history of the band?

Drew laughs, then responds. “I thought it was a book – or a movie – that we were living in.  But, to be honest, I never thought anybody would find us interesting enough to write a book about us.  We’re not like a high-profile band.  We’re still a little bit of kind of a renegade, sorta underground kind of band.  We never did get to that ‘big-time’ status.  Which I’m fine with!  So, it’s interesting that this band got chosen.  But, I think it is quite a story.  And it does set the stage for basically the whole jamgrass movement.  Probably by accident, but somehow we were at the forefront of this crazy jamgrass movement that has exploded.  But it is definitely a story that needed to be told.”

Was there anything in print that you regret?

“Well, I haven’t finished the book yet – but not so far!”

>>Read our review of “Leftover Salmon: Thirty Years of Festival!”<< 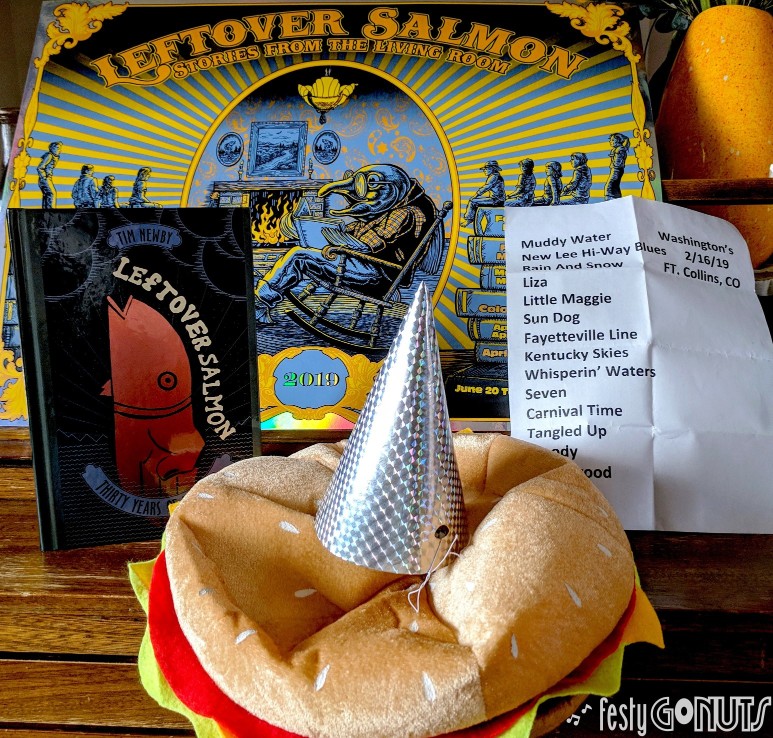 Luckily, for those headed to Colorado Springs in March, there will be a special “Stories from the Living Room” set at Boogie at the Broadmoor. And that’s certainly not the only thing to look forward to at this first-year festival.

“Boogie at the Broadmoor” will be three-nights of dancing, music, and activities at a 5-star resort in Colorado Springs. Leftover Salmon has invited some of their friends to join them on stage, and the weekend is bringing together some of the best acts in the bluegrass family.

But as many of you know, Leftover Salmon has spent the last four years throwing their Colorado-based festival weekend at the Stanley Hotel in Estes Park.

And for four years, this spooky event grew into an almost cult-like gathering.  Those who attended almost inevitably returned, and many touted it as the best event of the year.  It was referred to as more of a convention than an actual festival. It was an intimate gathering of like-minded music lovers – the quirky (read: weird) fans of Leftover Salmon.

So, why did Leftover Salmon choose to change locations in 2019?

Not an easy question, but Drew shares honestly with us. “When we first started doing it, it was our thing.  And we were the only band doing the Stanley Hotel.  And then it kind of gradually started turning into what is now I guess about 63 shows they are going to be doing there?

On one level, it wasn’t the special thing that it was once for us. And I think both parties were ready to move on and do something different.

It was such a fun, intimate, cool thing.  But once everyone else starts doing it, it’s just not as cool anymore. When it was all our own, then it was really super cool and amazing” 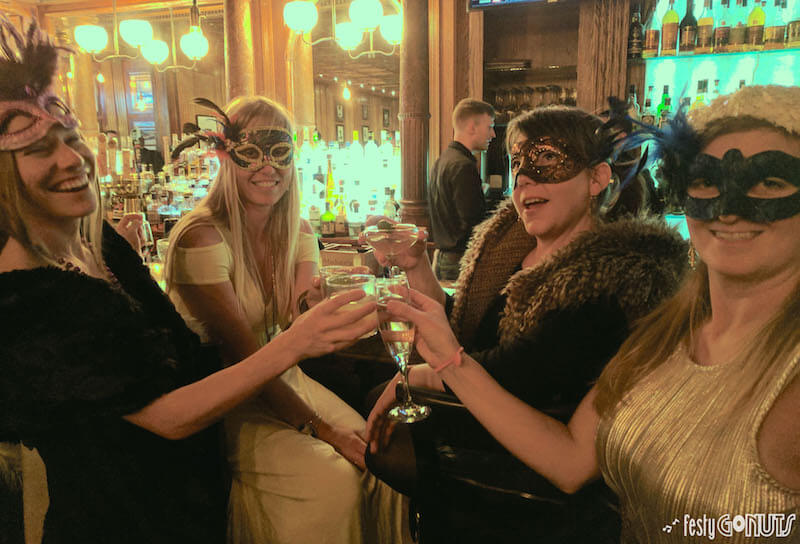 Let’s Get Weird at the Broadmoor

Admittedly, Leftover Salmon was a little hesitant to move this intimate event to the Broadmoor Hotel in Colorado Springs.  After all, it’s much bigger and fancier than the Stanley Hotel.

>>Read: What to Expect at Leftover Salmon’s Boogie at the Broadmoor<<

To be honest, many of us fans were skeptical at first. Will this property accept us crazy fans in our Saturday masquerade costumes or our Sunday pajamas?

Drew seems confident that this is the right move. “The more we learned about it, the more we liked it. It seemed like a great move up for us.  It’s a great property.  There are a ton more restaurants and bar…and, there’s room service!  I think it’s going to be great.

It’s got a lot of room to grow.  It’s a much bigger venue. And we’ll see how it goes. Hopefully, it’s something that we can keep doing.”

With this bigger venue comes a lot more potential for growth.

And Leftover Salmon is taking full advantage of that this year. They’ve invited over a dozen bands and musicians to help kick-off this new festival, and they’re planning a variety of activities and events to keep us all fully entertained.

And as Drew pointed out, “The professional aspect of the venue is going to make a huge difference – the space, the lighting, and the potential to put on a much more professional show.”

If the band is going to put on a bigger and better show, then we are sure hoping the fans are fully prepared to bring their A-game to Colorado Springs in March.  If you’ve never attended a weekend with Leftover Salmon, be sure to check out our past reviews of the Stanley so you have a bit of an idea what to expect:

Leftover Salmon at the Stanley Hotel: 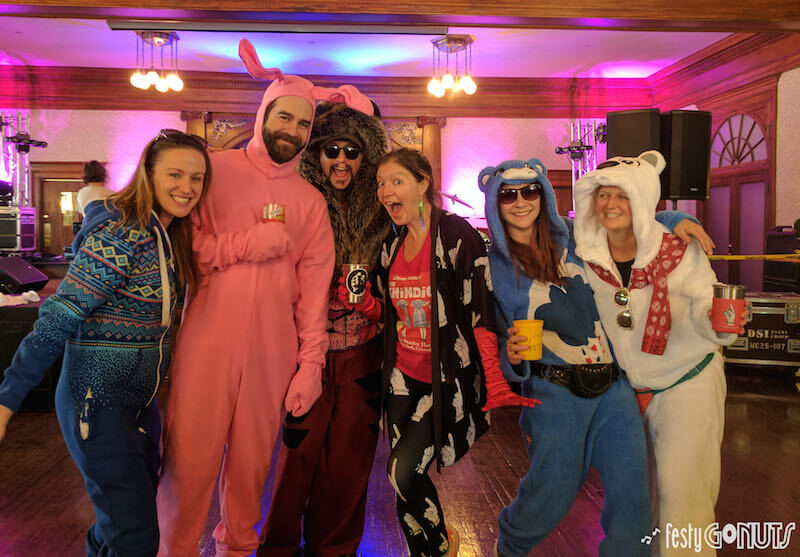 Will The Mayor Return?

Drew didn’t seem so confident. “I think he shacked up with the Mrs. Mayor McCheese. I’m a little frightened because there might be some miniature mayors running around.”

There’s only one way to know for sure!

Grab your tickets to Leftover Salmon’s first annual Boogie at the Broadmoor today! 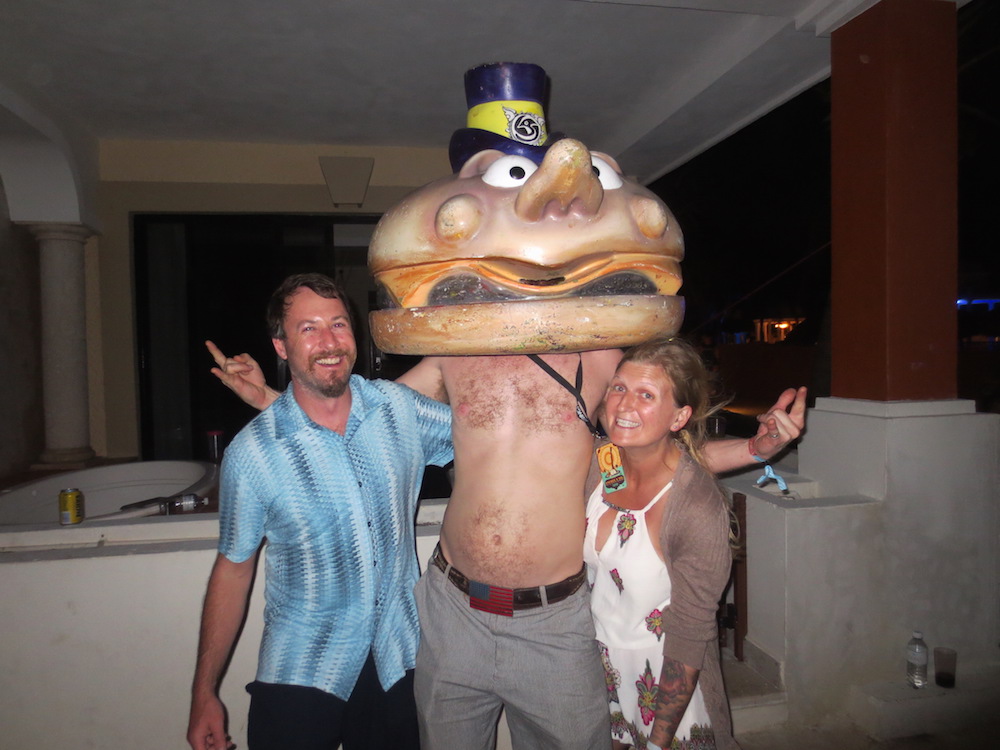