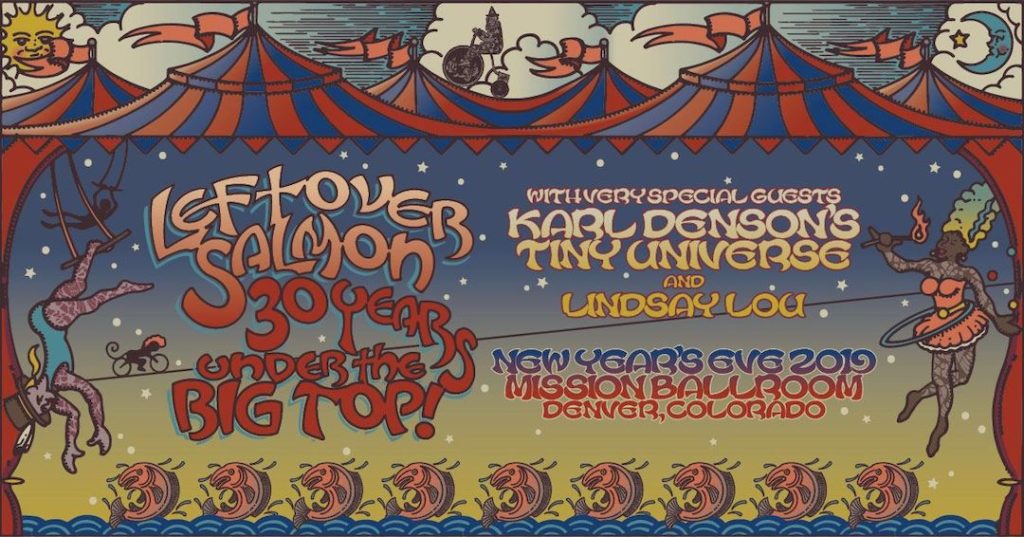 Leftover Salmon is commemorating the 30th Anniversary of their first show with a special 30 Years Under the Big Top New Year’s Eve celebration at the Mission Ballroom in Denver, as well as with a vinyl box set. We caught up with Vince Herman and Drew Emmitt fresh off their Strings and Sol performances and while they were on the road traveling to a few Emmitt-Herman duo gigs in the south.

Few people can say that they’ve done anything for 30 years.

Not so for Vince Herman and Drew Emmitt.

For 30 Years, Herman and Emmitt have created a legacy as one of the most influential, unique, gifted, and down right fun bands on the planet – Leftover Salmon.

It started as almost an accident on New Year’s Eve in 1989 when Herman’s Salmonheads joined forces with Emmitt’s Leftover String Band, and has now persevered through a new century, a technical revolution, 5 US Presidents (2 Impeachments!), Y2K, the Berlin Wall, the rise and fall and rise of comic sans, the demotion of Pluto, plus the inventions of the internet, the EU, iPhone, Fitbit, Zoodler and Roomba!

This New Year’s Eve will mark the 30th anniversary of the very first Leftover Salmon show.

“We jumped in the car and headed up to Crested Butte,” Emmitt remembers about that first epic journey.  “On the way, Vince was like, ‘Maybe we should call it Leftover Salmon?’  And there you have it.  And we played this rowdy ass night at the Eldo [Brew Pub in Crested Butte, CO]…”

And the rest is history. (A history you can read all about in Leftover Salmon: 30 Years of Festival by Tim Newby)

Herman and Emmitt had played together before, of course, but this was to be a different animal.

“Both bands were mostly acoustic bands, and we amped up, and got on electric instruments,” Emmitt recalls. “I used to play in rock bands, and Vince did too, but I hadn’t done so in a while. I had this new electric Mandolin that someone had built for me, and finally figured out something to do with it.  We just threw together a pile of tunes that we knew we had in common, and let it rip!  It was ragged, it was thrown together, and it was fun as hell!”

Leftover Salmon was born on that night in Crested Butte in 1989, and with it was conceived an entirely new genre of music, Polyethnic Cajun Slamgrass.  “That weird moniker that means everything and nothing at the same time,” says Emmitt. 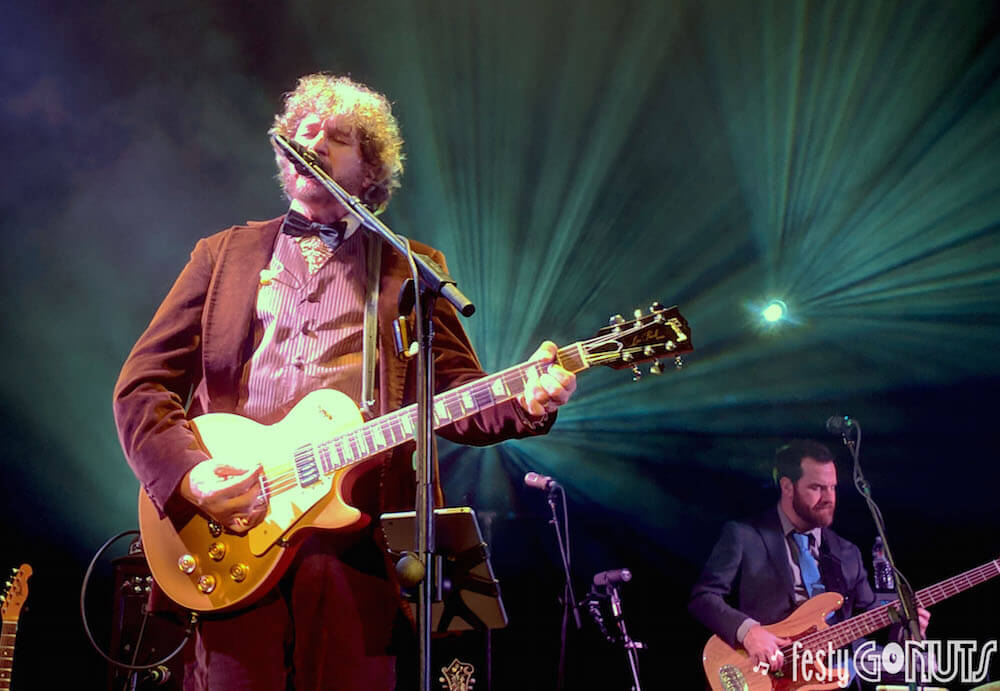 Much has changed with Leftover Salmon in the three decades since that first night.  Many band members have come and gone, but the constants have been Drew Emmitt and Vince Herman, along with the fans who have supported them along the way.

Emmitt says, “Our fans have been incredibly loyal and consistent, and probably more than anything, that’s allowed us to keep doing this the whole time…that people have stuck with us.  And it’s grown, obviously, and people have discovered us, but I still run into people that have been seeing us the whole time, and that’s pretty amazing.”

Through it all the fans have stuck with the Polyethnic Cajun Slamgrass.

“Yeah, we’ve kind of pigeon-holed ourselves into the genre,” Drew laughs.

“I think we’ve become better songwriters,” Emmitt continues.  “We became more of an original band and less of a cover band.  We’ve grown as people and musicians…there’s so many aspects of being in a band and playing music.  If you want to stay around for a long time, you have to learn how to pace yourself, at least somewhat.  I think we’ve probably gotten pretty good at that, because we’re still doing it!”

It might come as a surprise to fans that have been along the crazy ride that is Leftover Salmon, and seen more than a fair share of sunrises while the music goes on, that these guys are pacing themselves!

“That sounds weird, doesn’t it?” says Emmitt.  “‘Really, you guys, pacing yourselves?’  Yeah, I really think that we have.  You learn ways to find your center in the middle of the chaos.   ‘Cause it’s a lot of chaos, doing this for a living.  And you find your happy place, whatever that may be.”

For both Emmitt and Herman, their centers in the chaos may be found at times in their children.  When asked of their biggest accomplishments in 30 years, both men replied instantly that it was having great kids.  Both Drew and Vince have musically gifted offspring – a couple of whose talents were most recently on display at Strings and Sol in Mexico.  Willa Emmitt belted several tunes like a seasoned pro to the amazement and delight of the energetic crowd. Silas Herman ran sound for all of Leftover’s sets, along with picking up his dad’s guitar a few times on stage and jamming through the night on the mandolin.

“It’s the best,” says Emmitt about seeing his kids on stage. “To pass along to them, and have them take the torch and run with it – it’s pretty freakin’ awesome.  There’s no better feeling.”

“All that crazy traveling,” says Herman, “it’s not easy to raise kids in that environment, but I think we have modeled how to follow your passions, and hopefully that’s an important lesson learned that will guide them as they find theirs, you know?” 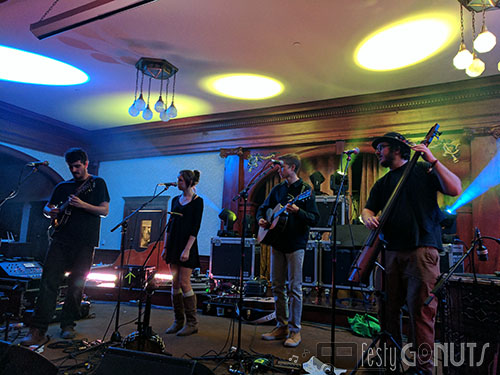 Strings and Sol in Mexico also treated Salmon fans to something that is always extra-special – Leftover Salmon with Horns.  In Mexico, it was Jennifer Hartswick and Natalie Cressman laying down the brass, which adds a whole new element to the Polyethnic Cajun Slamgrass. When Salmon takes the stage for New Year’s at the Mission Ballroom in Denver, Karl Denson will be in the house.

“Karl D loves playing bluegrass”, says Herman.  “We’ll definitely play a bunch with Karl.”  Lindsay Lou will also be in attendance, and Vince confirmed we can expect to see her collaborate with the band as well.  He also teased another New Year’s treat – a special surprise band. “You’re not going to know about it until they’re on stage!”

The Mission Ballroom’s “30 Years Under The Big Top” New Year’s celebration is going to be nothing less than the crazy circus you would expect out of a band that has been doing this as long and as well as Leftover Salmon.  After all, they’ve learned a few tricks in 30 years.

They’ve also accumulated a huge catalog of music in that span, one that will become available together for the first time in a complete vinyl box set – Leftover Salmon 30 Years Under The Big Top.  The collection, available for pre-order now, will include 10 complete albums (16 discs of vinyl), bonus tracks, a 24-page full colored booklet, a custom box with art by Gary Houston, and more.

“It’s a big collection, man, a lot of records,” says Vince. “It’s kind of wild to see everything we’ve done over the years in one place.  I can’t wait to physically get one in my hands. I think I probably lost all the old cds.” 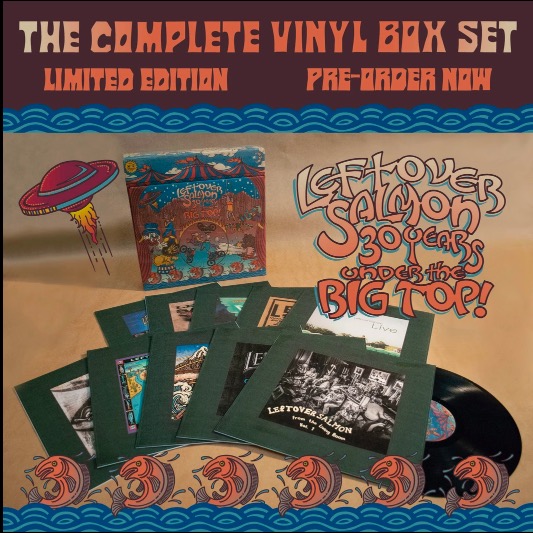 Vince Herman also confirmed there will be a new Leftover Salmon album in 2020.  “I think we’re going to release it track by track, not as an album, but occasionally drift some out there on the social chlamydias, and get at it.  It’s the way the kids are doing it these days.”

It is the way ‘the kids’ are doing it these days, but most of what the kids are doing these days they learned from Leftover Salmon.

“We’ve been blessed to do it this long, and have the fans who’ve stuck with us for this long, and still bring new people into the fold,” Herman concluded.  “We’re pretty lucky.”

Join us to celebrate these legends of music on New Year’s Eve for 30 Years Under the Big Top.

And when the polyethnic cajun circus is at a complete full tilt, remember, they’re pacing themselves. 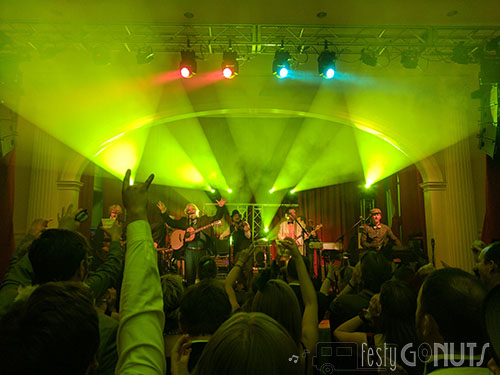