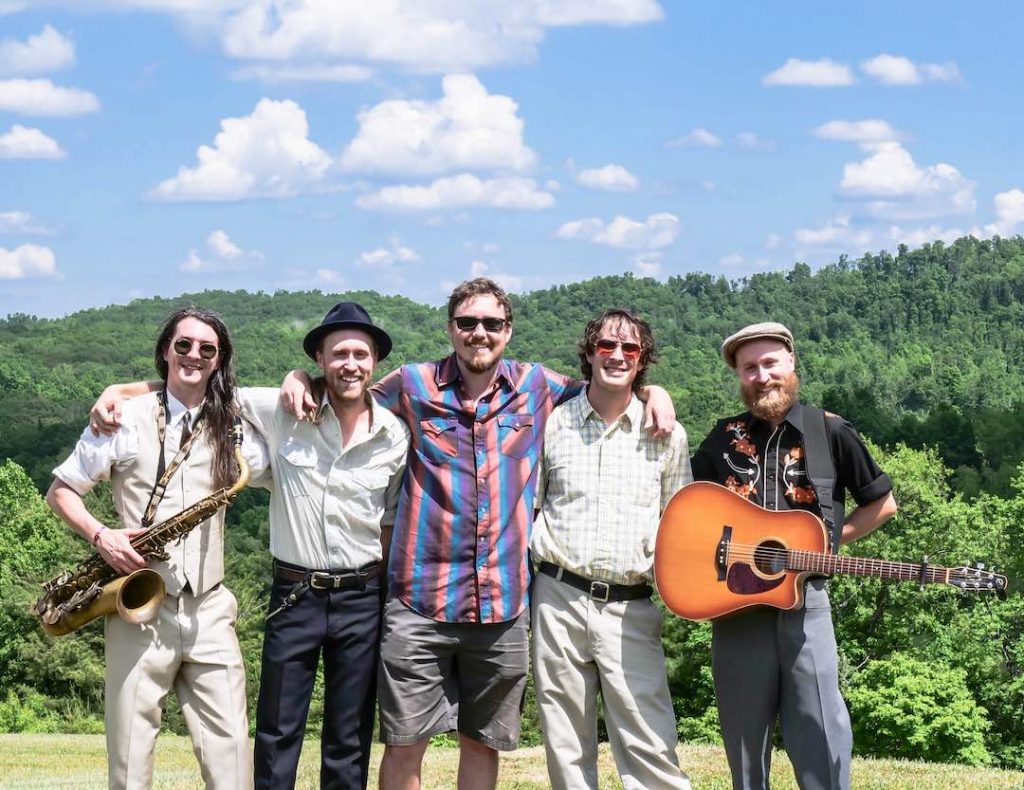 ASHEVILLE, NC — The Freeway Jubilee is excited to have independently released On The Horizon Vol. 1 on November 12. The Freeway Jubilee’s evocative blend of gospel-tinged southern rock and hard-driving soulful grooves is met with a flare of psychedelic mountain music and a strong dedication to the craft of the song. Freeway exhibits, “an assured balance between flash and restraint. For this band, the song is the thing… Listeners who appreciated Delaney & Bonnie in the ’70s — or who enjoy the Tedeschi Trucks Band today — will find a similarly eclectic and soulful mindset at work,” says music journalist, historian, and author Bill Kopp.

Performing live, The Freeway balances well-structured tunes with a jam ethos that lends a raw and explorative power to the music. Their heartfelt lyrics weave imagery through a tasteful layering of vibrant 4-part vocal harmonies, crisp Telecaster licks, smoky saxophone riffs, and an eclectic assortment of organ/piano arrangements, creating a soundscape that is both musically intricate and soulfully energetic. Rest that on the groove of a unique and driving rhythm section, and you are sure to feel the magnetic force of this band.

The band formed in Asheville, NC in 2015 and is made up of a collective of songwriters. The Freeway Jubilee is twin brothers, both vocalists, Adam and Jonathan Clayton on keys and guitar, respectively, along with singer and bass player Kenny Crowley, blazing bari and tenor saxophonist Hunter Parker, and the John Bonham-style drumming of Cartwright Brandon.

“There’s a breezy quality to the sort of Americana the band makes, and it’s most definitely influenced by the guys’ time on the road, or their desire to get back out there. It’s the sound of Hammond organ and piano weaving raindrop melodies around an electric guitar, the whistle of wind through an open window and a dog-eared road map sitting on the dashboard. It’s equal parts Allmans and Dawes, Doobies, and Deep Dark Woods,” says Steve Wildsmith of The Maryville Times.

The Freeway Jubilee says, “As a hard-working independent band, it tends to feel like you’re constantly moving towards goals that are far out on the horizon and hard to reach. It’s a long and challenging road and it can feel never-ending, but something on a deep and meaningful level keeps driving you onward towards those ever elusive landmarks. For us it’s truly the music and the brotherhood that keeps us going.”

Cultivating positivity, especially through challenges, is the overarching theme of the album. This clear optimism can be heard in the upbeat opener “In Motion,” the bright rock and soul vibe of “Reachin’,” and the gospel and mountain music inspired closing track “Humble Song” (in which Chris Moe adds to the playfulness of the sound via his harmonica accompaniment.)

The band continues, “Combine that with actually being on the road a lot and literally headed towards that horizon on a regular basis, and the fact that we’ve been working on this album so long in striving to capture the real essence of Freeway, this release feels like it’s been ‘On the Horizon’ for a long time. Especially since there’s a Volume 2 yet to come…”

Produced by Kenny Crowley and The Freeway Jubilee, On The Horizon Vol.1 was recorded mostly at the band’s home studio in Asheville, NC, mixed by Robin Applewood and Kyle Brone, and mastered by Justin Weis at trakworx.com [Sammy Hagar, Papa Roach, The Polish Ambassador, NOFX].

With “In Motion” as the opener, the band presents their vocal harmonies front and center over a straightforward rock and roll beat with a catchy saxophone hook. This track was recorded by Gar Ragland at Citizen Vinyl—a newly converted communal space housing a record press facility, cafe, bar, recording studio, and more – located in the historic Citizen Times building in downtown Asheville. The album includes 7 original tracks and clocks in at 45 minutes, the perfect length to fit on vinyl—which is being pressed at Citizen Vinyl and is due out this Winter.

The funky, groovy “Sunlight Stream” turns up the heat with the additions of Dr. Bacon’s Michael Crawford on harmonica and Myles Dunder on alto and tenor sax as well as Jacob Bruner on trombone. Penned by Crowley on a solo camping trip in the Blue Ridge Mountains, the song speaks of a divine communion with nature restoring a hopeful outlook at a time when the state of humanity seems to be unraveling and perilous.

Whole world’s tearing at the seams when …

Everybody’s hiding from disease and

Bleaching and cleaning and trying not to breathe in …

It’s enough to bring a man to tears

So I let those teardrops fall into that

Sunlight stream on a

Holy water rolling through the boulders and the trees

I can hardly believe what I’m seeing

It’s the only kinda churchin’

The first of the two more lengthy tracks is a country rock suite “Not the Same,” which blazes right out of the gate before breaking down into a captivating instrumental interlude signaling the great turnaround and ultimate rebirth of the “prodigal son.” Former Freeway member Freddie Barry joins in on guitar on the genre-spanning epic “Rugged & Free” which pays homage to the beautiful and dark history of American music, art, and literature. Crowley says, “It’s a nod to the wealth of world-influencing art that our young country has created in its short life, due in large part to the underprivileged and working class, and the cross-pollination of cultural influence throughout our history.”

Barry also joins in on the album’s ballad “Let Me Try”— a song written by Adam Clayton about how being sincere and honest with people in life contributes to personal peace and how living openly, intently, and putting your best foot forward is the key to finding and keeping your path clear.

If you need me, I’ll be in my garden

In the morning, won’t you hearken

To the things that are deep down in your soul

Always striving to evoke an emotional experience in their listeners, the band continues to shape their lyrics and compelling vocal harmonies towards the human condition, inspired by the real life experiences of a traveling band on the current American landscape. Freeway says, “Music is such a powerful form of expression and a truly universal language. We think the thing that has always drawn us the most to music is the chance to share something meaningful that people can relate to, and hopefully we’re uplifting or moving them in the process.”

Sheryl and Don Crow of Nashville Blues Society say of Freeway, “You’re gonna hear a little bit of everything we’ve grown up with–the Allmans, Garcia-era Dead, Dylan, on up thru the likes of Gov’t Mule, the CRB, and Tedeschi-Trucks on today’s scene. We don’t want to call them ‘Southern rock,’ because, although they have Southern roots, this music is much, much more… Their incredible musicianship, collaborative songwriting, and spot-on harmony arrangements make this set special.”

Formerly dubbed ‘The Freeway Revival,’ the group has been continually growing a dedicated grassroots fan base with their energetic sound. After the successful release of their 2016 self-titled EP, The Freeway Revival burst onto the scene in the Fall of 2017 with their heavy hitting debut album Revolution Road, which appeared as #20 on Jambands.com National Radio Charts. Freeway continues to show relentless work ethic and a prolific sense of creativity and in early 2019, as they stepped into a bigger and bolder sound with the addition of a saxophone, they evolved into what is now The Freeway Jubilee. Since then, The Freeway Jubilee released The Revival Days, a digital only compilation pulling from the two previous albums, and in 2020 they put out a single, “Let Me Try.” 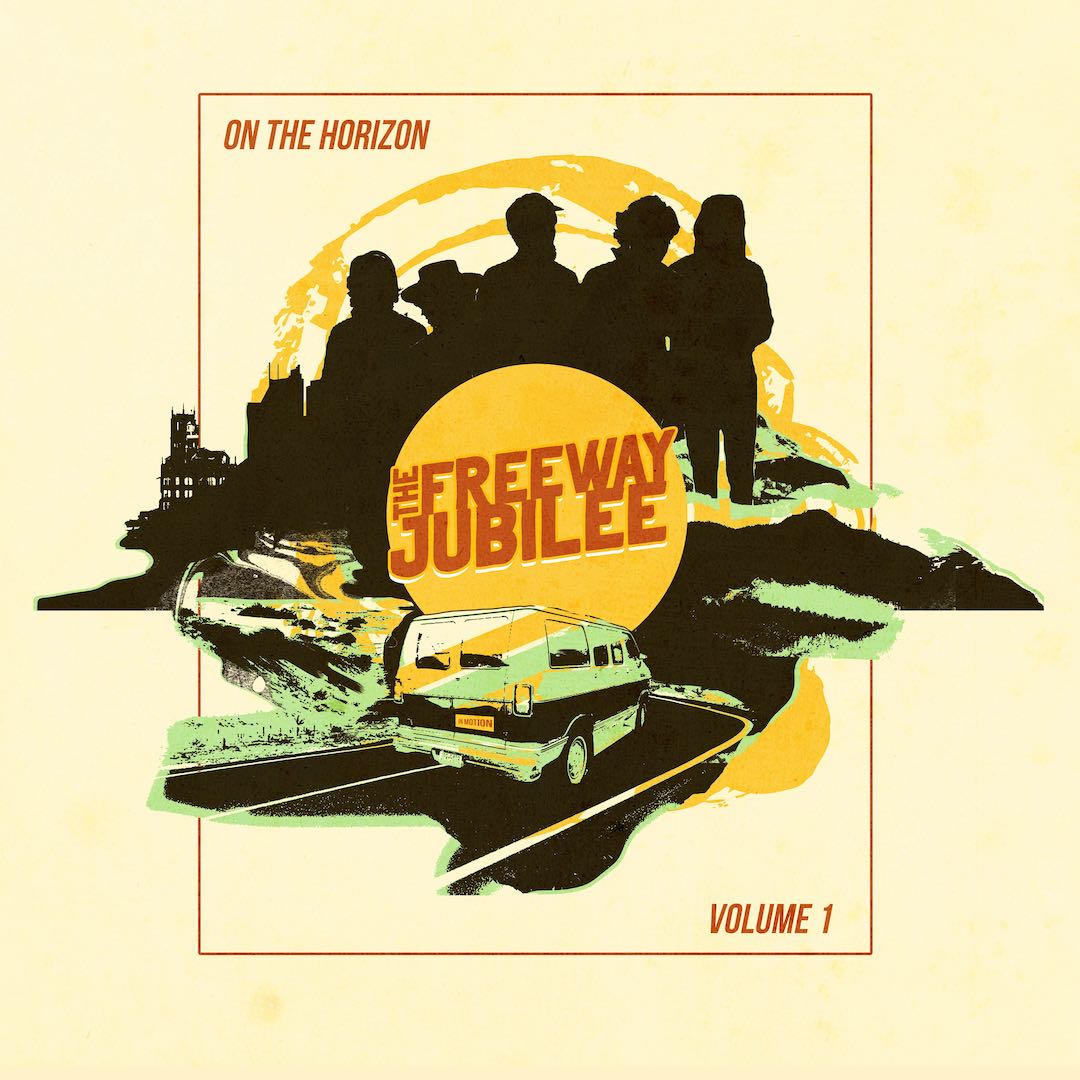 On The Horizon Vol.1 Track Listing

Produced by Kenny Crowley and The Freeway Jubilee

All songs written and recorded by The Freeway Jubilee

Mastered by Justin Weis at trakworx.com

‘In Motion’ recorded by Gar Ragland at Citizen Vinyl