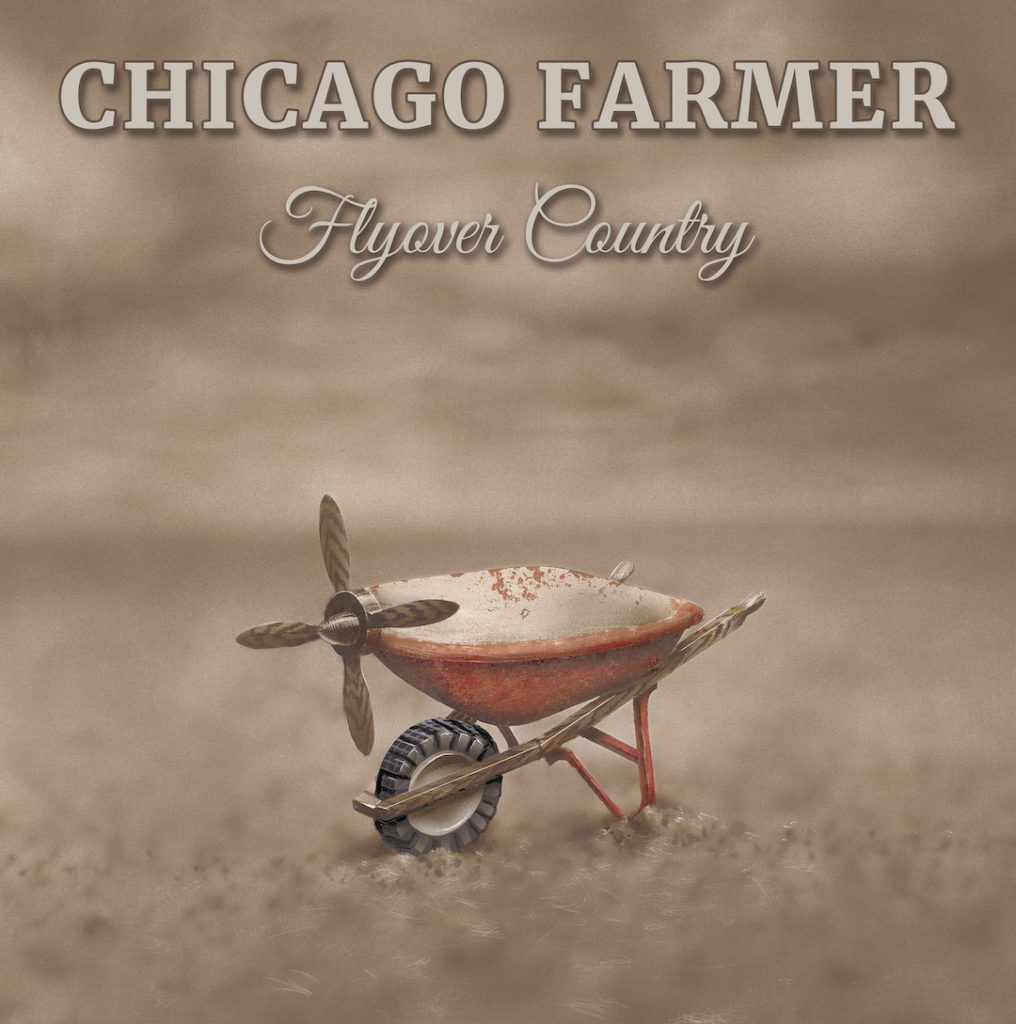 When I received a Press Release promoting the new Chicago Farmer album to be released on February 7, I will be the first to admit I was not very familiar with his music.  I was aware of him, and may have caught a bit of a show at a festival somewhere, but I couldn’t name a tune or call myself a fan.

In the past several hours since receiving the release, that all as changed.

I began my musical journey today by listening to an advance copy of Chicago Farmer’s upcoming album, Flyover Country. Then I listened to it again.

Flyover Country is one of those rare pieces of art that makes it hard to believe it is new.  It seems like I’ve been listening to this for years. It’s poetry with a kick.  There is power in the songs, from the arrangements to the lyrics, it makes you feel.

Cody “Chicago Farmer” Diekhoff is the type of songwriter that connects with something in everyone.  His songs are Americana, not in the sense the word is often used to describe a genre or style, but in the sense that it is truly American music.

Diekhoff tells gritty folk stories that have the potential to resonate across all demographics of music fans.  In a country as divided as ours currently is, music may be the only thing holding us together, and Chicago Farmer could be the glue. 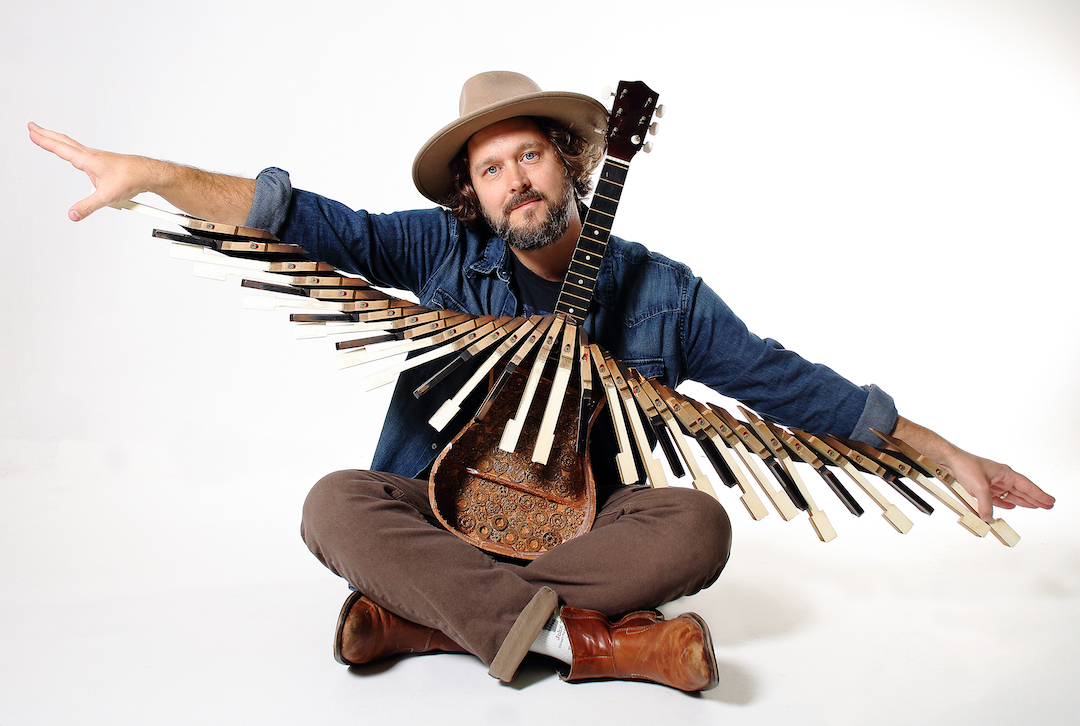 Putting the Poetry in Motion,
Chicago Farmer Joins Forces with The Band of Heathens
for New Album, Flyover Country  – Due Out Feb 7

Recorded at The Finishing School in Austin, Texas

“The arrangement brings together the combination of Diekhoff’s blue-collar worker against ‘the man’ lyrics, some top tunes and a great band that’s capable of several styles and moods.”
–Americana Music Show, Tony Ives

BLOOMINGTON, IL — For recording artists, albums can be like children — it’s hard to go on record choosing one as a favorite. But Cody “Chicago Farmer” Diekhoff doesn’t hesitate to designate his forthcoming release, Flyover Country, as his “golden child.”

Chicago Farmer is known for his clever and heartfelt songwriting and unique voice. Todd Snider exclaims, “Chicago Farmer is my brother; if you like me, you’ll love him,” and Pokey LaFarge says  “Chicago Farmer represents the best qualities of Midwestern U.S.A. His lyrics, his stories and his heart are true… Definitely one of my favorite singers out there today.”

Flyover Country features The Band of Heathens and was recorded at the Heathens’ studio, The Finishing School, in Austin TX with Gordy Quist and Ed Jurdi serving as co-producers alongside Diekhoff.

Jurdi says, “Cody (Chicago Farmer) came in with a stellar batch of songs and really had a good vision for what he wanted the album to be. The material really takes a look at the kaleidoscopic fabric of the Midwest. Chicago Farmer writes and sings in a truly authentic voice about the people that inhabit the spaces that America’s hopes and dreams have been built upon. Always the underdog, sometimes overlooked, but never to be forgotten.”

“I think it’s my best work so far and definitely the one that I put the most into,” Diekhoff said of the 10-song album, due out Feb. 7. This is Chicago Farmer’s first studio album in four years and it will be available on CD and vinyl, as well as digital & streaming services.

The 2nd single, “All In One Place,” is out now and starting to hit Americana reporting radio stations American Songwriter premiered the song and calls, “This tale of high hopes and low returns” an “outlaw country number that resounds with heart and humor.”

“I knew as I was writing these songs that they called for another direction — and a band. A band that was tight, had soul, and knew how to make records,” Diekhoff said about Flyover Country, his sixth full-length studio album. “I’ll always be a folksinger, but you can’t just keep doing the same thing over and over. I decided it’s time to throw some fuel on this fire and get it going. For me, it’s all about the poetry and playing with a band is about putting the poetry in motion a little differently.”

Fans of Chicago Farmer will already know at least a couple of the songs on Flyover Country if they’ve seen a show in the past couple years. In fact, Diekhoff’s talking-blues tribute to hardworking, unsung, everyday heroes, “Dirtiest Uniform,” and his country-folk singalong anthem extolling the virtues of intimate live music shows and cheap beer over corporate arena concerts, “$13 Beers,” are among the highlights on 2018’s double-disc live release, Quarter Past Tonight.

Diekhoff and the Heathens cover a lot of musical territory on Flyover Country.

The album opens with “Indiana Line,” a country-tinged rootsy raveup, a tale of a desperate drive down the road to redemption with great, growling slide guitar work. This track was released towards the end of 2019 as the album’s first single. Americana Highways premiered it, writing, “With an ominous western intro, ‘Indiana Line’ builds up to a foot stompin,’ thumpin’ instant singalong. This bodes very well for Chicago Farmer’s Flyover Country. The harmonies with The Band of Heathens are irresistible, and the style is absolute contagion.”

The title track is a languid waltz with a shuffling beat and jangly guitar, an ode to the people of the rural heartland, his people, putting Diekhoff’s high vibrato to great use. A brisker waltz beat propels “Collars,” another tribute to small-town folks, this one inspired by a young soldier who didn’t come home from Iraq.

Harmonica and baritone guitar drive “Deer in the Sky,” an uptempo folk-rock number about the benefits of flying over driving (you can drink beer on a plane and you’ll never hit a deer). Things get downright raucous on a couple songs, with Diekhoff’s grunge-rock roots coming out on “Mother Nature’s Daughter,” an environmental protest song, while the guitars go to town on “All in One Place,” a humorous look at the sad truth about making money in the music business.

Diekhoff pays tribute to Hank Williams with the album’s sole cover, Williams’ “Ramblin’ Man,” while also honoring Kenny Forbes, a friend’s father who introduced a young Diekhoff to the music of Hank Williams, setting him off on his musical quest as a folksinger. “Ramblin’ Man” starts with a stripped-down presentation but by the final verse it explodes with intensity.

The album ends with “The Village Revisited,” a sprawling, gospel-tinged song about the importance of community that recalls Creedence Clearwater Revival’s take on “Midnight Special” at times and at the end sounds like a party has broken out in the studio.

Through all the songs on Flyover Country — and most Chicago Farmer songs, for that matter —runs a common thread, a love and respect for regular folks, those who might be overlooked and underappreciated.

“A lot of my friends are just getting by day-to-day,” Diekhoff said. “We keep at it, we keep working hard. Hopefully, eventually, things will turn around.”When Flyover Country comes out in February, Diekhoff will put his solo troubadour days behind him (After a run of solo dates opening for Todd Snider in January), at least for a while. He’ll hit the road with a band, performing as Chicago Farmer and The Fieldnotes which includes Jaik Willis, Cody Jensen, & Cosmic Charlie Harris.