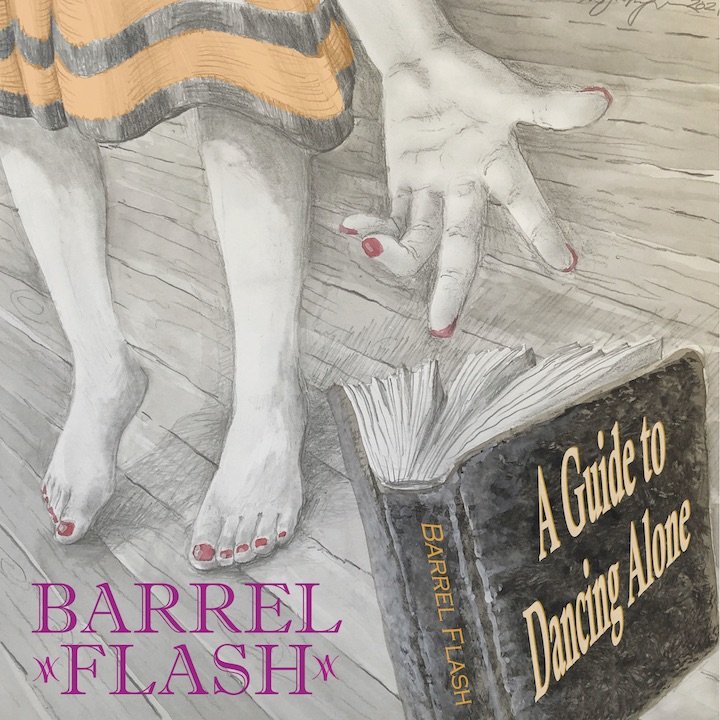 BARREL FLASH is a Minneapolis/St. Paul-based trio coming out of the folk traditions of the US, UK, and Ireland. Julia, Priscilla, and Ross met in the vigorous music and brewery/taproom/club scene in the Twin Cities. With each member bringing a different bouquet of musical influences, the trio applies their unique stylings to original work and new interpretations of what we consider classics, creating an honest and vibrant sound of our own.

Barrel Flash has just released their debut album, A Guide to Dancing Alone.

We spoke to Barrel Flash about their debut album and their plans for the future:

Tell us a bit about your new album: A Guide to Dancing Alone

Julia Brown: This album is a collection of songs about loneliness, travel, and the hope for better times around the corner. While all of the songs were written pre-COVID, we’ve found that they’re all thematically pretty in line with how we’ve been feeling over the past three years.

While the overall genre could be described as folk or country, the styles range from melancholy waltzes to a 70s-flavor protest song to a martial ballad set in the Star Wars universe. Overall, we hope that listeners will dive into each distinct story and find something they recognize to
make them feel like they aren’t alone.

Ross Johnson: We were making strides as a trio when COVID came along. We individually had songs at various stages of progress, so the lockdown put us in the unique position to dig in and go for an album: There would be no playing out for a while.  Our evolving sound was the right
path for taking new songs forward. We passed ‘draft’ tracks back and forth to arrange and refine, and an obvious thematic alchemy crystallized out of that process.

The concept was there from the start. ALL of our songs, though written individually, touched on themes of loss, loneliness, travel, the stuff that affects one in life in hard ways. But there was wry humor and some cheer in there too! We ran with both the situations in each story, and the internal lens through which the writer saw it.

We had TIME to refine the vibe and nuance in each song’s intent and arrangement before going into studio. Recording for the most part we did ONE-at-a-time due to COVID, so being ready was key. I think we all three have huge respect and love for each other’s songs. This process brought patience and thoughtfulness to everything. I think it’s palpable in the album and you hear it start to finish.

What did you learn about yourself when writing and creating: A Guide to Dancing Alone?

Priscilla Thomas:  I learned a lot about how to collaborate in a creative project, and the amazing and unpredictable results when you put multiple heads together. A song may turn out entirely different than the original writer’s concept, or it may just be beautifully developed along the original lines. I loved being able to create my little part of others’ songs and engage in their creative process. And personally, it was a huge boost to my confidence as a writer, to have others contribute such great energy and input to my songs. This project confirmed my love for the production aspects of music.  And I learned that I can sing lead!

Ross Johnson: I love Mighty Ocean. We each got to cut loose in entirely different ways and a choir?! Epic!

Julia Brown: My favorite song this week is Riding Away, which is a tune that features our signature harmonies, Mandy Fassett on cello (Mandy arranged and played violin, viola and cello on our album) and is a perfect choice for the holiday drive through a blizzard that I’ll be starting in a few hours. I really enjoy the specificity of the story and the characters in this song; I think it’s very evocative.

Priscilla Thomas:  It’s so hard to pick a favorite; I love every song in its own way.  But today I will select Starting Over, which is so unusual and beautiful.  When my grandson was an infant he loved hearing me sing this song to him – it is really a gorgeous lullaby. Mandy Fassett’s strings add so much.  And I love Julia’s original concept for the song, taking the chord progression from the Minneapolis skyline.

What is next for your band? Any big plans?

Ross Johnson: GOOD QUESTION. Our trio is Twin Cities-based, and we each are at entirely different stages of our life and work path. Our goal is to share what we do with listening audiences in an intimate way whenever we can. Our resolution for this coming year is to push our album on air and streaming, and book shows and at regional festivals that are fun and create a connection between performer and audience. In some past life we were a brilliant pub band in Ireland or Scotland or just round the corner from you in YOUR past life. We’ll be finding those places in the Upper Midwest for our 2023 gigs.

Now that we can actually be in the same space and return to live performances and song creation together, we hope our next album will carry many more songs we create collaboratively from the ground up. We’re already thinking about that!

BARREL FLASH is a Minneapolis/St. Paul-based trio coming out of the folk traditions of the US, UK, and Ireland. Julia, Priscilla, and Ross met in the vigorous music and brewery/taproom/club scene in the Twin Cities. With each member bringing a different bouquet of musical influences, the trio applies their unique stylings to original work and new interpretations of what we consider classics, creating an honest and vibrant sound of our own.

JULIA BROWN (vocals, piano)- Julia has been performing around the Twin Cities since 2007. With roots in musical theater, art song, Irish folk, and jazz, she is now a nonprofit arts administrator by day and Jack-of-most-trades singer by night. She is a proud member of the Unity Singers in St Paul. Her last band, Sister Theda, released their EP in 2017, and she’s been lucky enough to add some backing vocals to Bring Prudence’s upcoming album.

ROSS JOHNSON (vocals, acoustic/electric guitar, harmonica)- Ross has been a singer/player in the Twin Cities since the late 90’s, with a passion for blues, British folk and rock, and projects a Bluegrass lilt derived from his dad, who was a fine folk musician. He is a crack harmonica player, buys too many guitars and circulates in the singer/songwriter community backing other performers.

PRISCILLA THOMAS (vocals, electric bass, guitar)- Priscilla is a longtime member of the area folk music community. She is part of the group Sweet Rhubarb, a trio that is active in the Twin Cities and greater midwest. Jazz, R&B, and pop sensibilities shine in her writing and playing. In Barrel Flash, Priscilla provides a tasteful foundation of bass and rhythm guitar. Her intuitive playing and vocal harmony skills are the glue that holds Barrel Flash songs together.